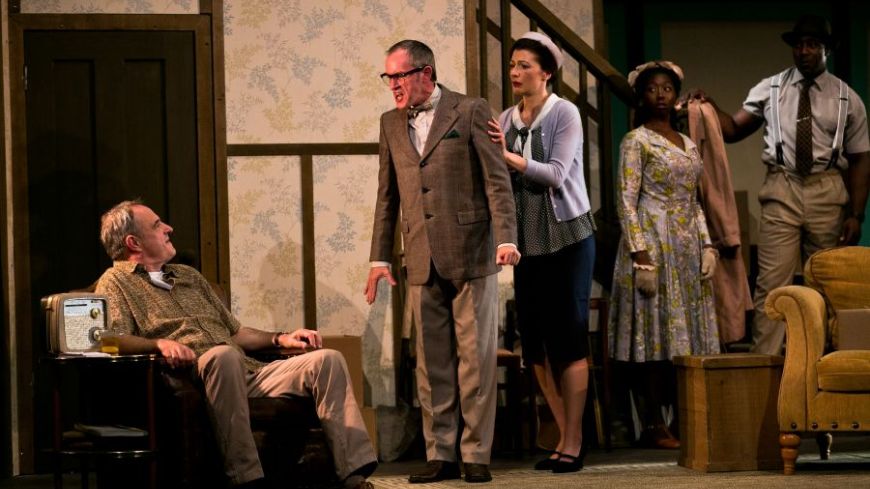 Inspired by Lorraine Hansberry’s ground-breaking and award-winning A Raisin in the Sun, the first play by a black woman to make its mark on Broadway, Clybourne Park by Bruce Norris, itself award-winning, is a searing exploration of the dynamics of racism and prejudice. This is very clearly a play of two halves – the first act set in 1959, the same year that Hansberry wrote her award-winning play and containing some characters from it – and the second act set in 2009, the year that Barack Obama was inaugurated as President of the United States. With a linking factor of a single home that has seen changes during the 50 year time gap between the two acts, the clever use of double-casting in roles is exploited to its best advantage as we see the development – and otherwise – that the years have wrought.

Setting the scene in a wonderfully atmospheric 1950s set, we see a home in the process of decamping. The feel of the 1950s is further emphasised by the stylised characters introduced in the opening sections, so unreal that there is an element of caricature in the portrayal; however, a turning point brings alive a change as a can of worms is opened and reality creeps in.

From the physicality of the oppressed and the oppressor to the paper thin veneer of the bigot to the politically-aware discourse hiding the prejudice and deeply hidden attitudes in modern day, the strong cast of 8 works well together to bring the periods to life. The writing is sharp and to the point, and the dialogue bounces between seemingly inane conversation about nothing to targeted barbs about the origins of self and belonging, keeping the pace driving.

The script maintains humour throughout with some perfectly timed and executed laugh-out-loud one-liners. These moments of laughter also highlight to the audience the changes in attitudes; while we laugh we also check ourselves, aware that the jokes are often at another’s expense. It inspires discussion: are we really less prejudiced than before or do we hide it better? The multi-layering of prejudices, period sensitivity and history that flow through this piece are beautifully implemented with an particularly successful adherence to detail.

What seems at odd with the piece are the two beginnings to the acts, where the pace or delivery seems off-kilter in timing, somewhat slow and meandering. It is only when these are shrugged off that the text takes off.

Stand out moments include Karl’s speech pleading for reconsideration of the sale of the house in 1959 and the one-up-man ship of joke telling in 2009. A special mention should also go to the stage crew who deftly change the set from 1959 to 2009 in the interval, no mean feat.