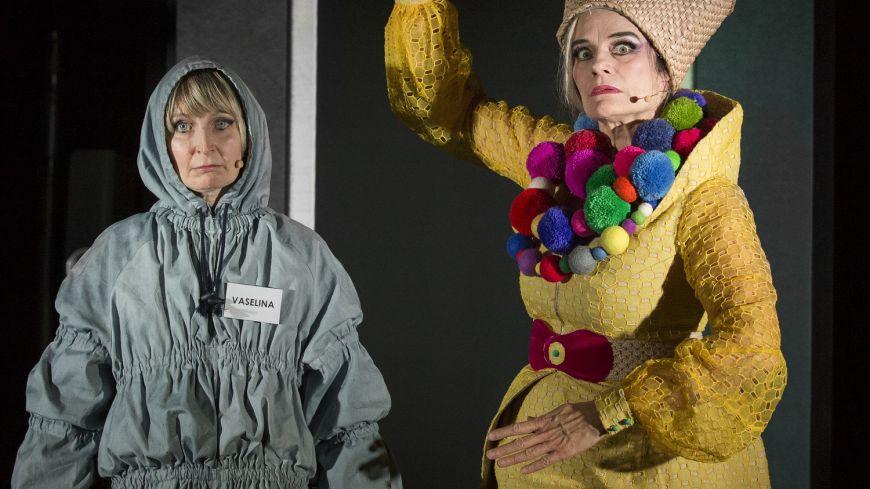 ‘Rules? Schmules!’ So says the resident of floor 101 of Poultry Park Apartments where she heedlessly breaks the great list of ‘No’s’ that greet those who enter its portals.

This resident is Baba Yaga, based on the old Slavic folk character who walks on chicken legs known for her ambiguity of possibly helping, possibly hindering, and played stupendously well by renowned Australian artist, Christine Johnston. Like a mustard clad Cruella de Vil wearing a straw basket for a Cossack hat, this formidable woman is up to date enough know how to do the Floss and play two recorders at a time, a feat only seen done to date by Edinburgh’s redoubtable John Sampson.

Faced with complaints from the other apartments, the block’s timid receptionist Vaselina, whose life has been a series of disappointments, like being asked just to mime in her choir, is hilariously yet movingly captured by the mistress of children’s theatre, Shona Reppe. Dressed in her silver cocoon- like anorak, she has to summon courage from her Russian nesting dolls to challenge the scary woman who lives on what turns out to be not quite the top floor.

Much to the chagrin of Vaselina, Baba Yaga suffers from perpetual hunger (Jelly babies are never enough), yet her mood this day, as they soar in the lift far beyond the rule- bound apartment block, is on the side of Vaselina and kindness.

Peter Nelson’s compositions start by evoking the tale’s Russian folk origins with balalaika sounds, before going on to music with the feel of a film score towards the end. In between are some exaggerated ‘normal’ sounds like eating a banana or putting on lip gloss in a ‘No Noise’ space, that are made to sound like eating with headphones on, to which Johnston and Reppe bring immaculate timing and co-ordination. Johnston’s own amazing mouth sounds make it easy to think she could be miming but her singular vocal talent is a natural part of this colourful soundscape, as is her impressive saw playing.

The array of variously shaped silver screens play host to incredible animation from Chris Edser that begins with a pre -show slithering caterpillar and includes the angry faces of complaining neighbours, some stylised slinky cats as well as some gorgeous nature shots and of course the high flying lift. Selene Cochrane’s outstanding costumes go towards making the show’s experience blow away impressive!

The audience joyously clapping in time to the final dance is testament to this new version of Baba Yaga, co- created by the show’s director Rosemary Myers with Johnston and Reppe, being a fabulous and thoroughly entertaining metaphor for positivity and hope; for finding what lies within.