Film of the Week: You've Been Trumped 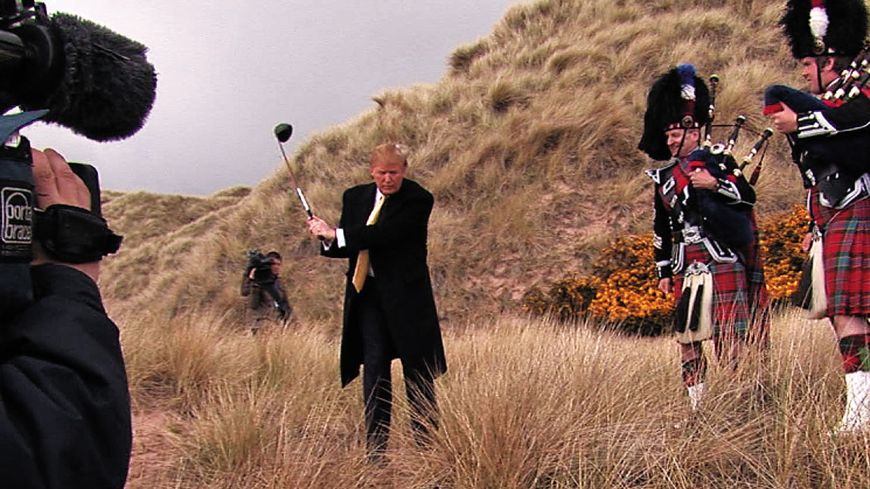 Celebrity tycoon Donald Trump lives up to his billing as a crass egomaniac in You've Been Trumped, a compelling, 95-minute documentary revealing Trump's bullyboy antics as he bulldozes a sensitive coastal ecosystem near Aberdeen to create a mega golf resort.

What is astounding, in this at times heart-warming, amusing, and most definitely ire-raising David-and-Goliath story, is how much the government, local police force, and even academic institutions, appear to have colluded  with Trump in his campaign to force out long-time residents.

Director Anthony Baxter says he initially started filming the documentary out of a sense of frustration at how the story was being reported by local media as he watched events unfold from his base in Montrose (just down the coast).

Intercut effectively with scenes from Bill Forsyth's classic film Local Hero (part of which was shot in this area), Baxter follows the trials and tribulations of the plucky group of local residents who refuse to sell their land to make way for the US property mogul's greens and a mega housing development consisting of a luxury hotel, 500 houses, and 1,000 holiday homes.

The spirit of defiance is epitomised by local salmon fisherman Michael Forbes, and his elderly mother Molly who lives in a caravan. Trump refers to the Forbes's property, bordering the golf resort, as a “pigsty” and “slum”, not worthy to be in view of his course. It's heartening to see how the local community rallies together around them.

As Trump's campaign to remove the residents shifts up a gear, with the threat of compulsory purchase orders, the residents seem to have increasingly little redress through official channels. In a clear act of intimidation, the diggers pile a huge sand wall around one resident's property, and at one point director Anthony Baxter himself is arrested (he was later released without charge), when he tries to interview a green keeper as to why Forbes had his water cut off.

In contrast to the besieged residents, Trump makes an easy villain and a foolish one at that. Jetting in for occasional photocalls among the dunes, he fires off insults on the character of the residents, and demands brazenly to be taken seriously as an environmentalist. The film regularly mocks "the Donald" offering moments of levity: when a strong Scottish breeze reduces his coiffure to a collapsed haystack he is heard urgently demanding from his huddle if anyone has a mirror. Othertimes you just want to cringe, like at a reception, where he compliments Miss Scotland on her beauty and then tells a minion to get her a job in his sales department.

Baxter almost overdoes Trump's darkness in the interest of building drama - the use of sinister mood music coming to mind. But this is more of a stylistic quibble: the story is a strong one, and it raises important issues about Scottish land rights. What's more the score by Sigur Ros frontman Jonsi, adds to the overall impressiveness of the doc.

After seeing You've Been Trumped, my first thought was why on earth wasn't the film - which was completed in May - shown at the Edinburgh International Film Festival in June? A topical, real life, ecological drama on our doorstep, this would have been an ideal way to resuscitate the EIFF's flagging reputation a little.

According to the Hollywood Reporter the EIFF rejected You've Been Trumped on the grounds that it was “too much of a political hot potato”. Whether that is the case or not, the Scottish Government comes off badly after, in November 2008, it overturned the original decision by Aberdeen's local authority to reject planning permission for Trump's project.

Although he appears only briefly, the film casts a dim light on Alex Salmond, the Scottish First Minister, Scottish National Party leader, and MP for the constituency where Trump's golf resort is located. With its waning sources of funding the EIFF might have been reluctant to bite the hand that feeds it, but if the organisation has succumbed to that level of timid decision-making then it should pack up its bags right now for everybody's sake. The irony is that the EIFF having trumpeted its partnership with the Sheffield Doc/Fest, where the film won the Green Award, left out the obvious choice for screening in Edinburgh.

You've Been Trumped also recently picked up a Special Jury Prize award from Michael Moore's Traverse City Film Festival and Best Feature prize earlier this month at Edinburgh documentary festival Edindocs. With a recent screening at the Scottish Parliament and reports of building delays for the resort, the Tripping Up Trump campaign seems to be gathering steam. Sadly, much of the damage to these unique Aberdeenshire dunes – carved out over millennia - appears to be already complete.

You've Been Trumped is screening on 2 October, 20:40 at Filmhouse. Q&A follows with director Anthony Baxter