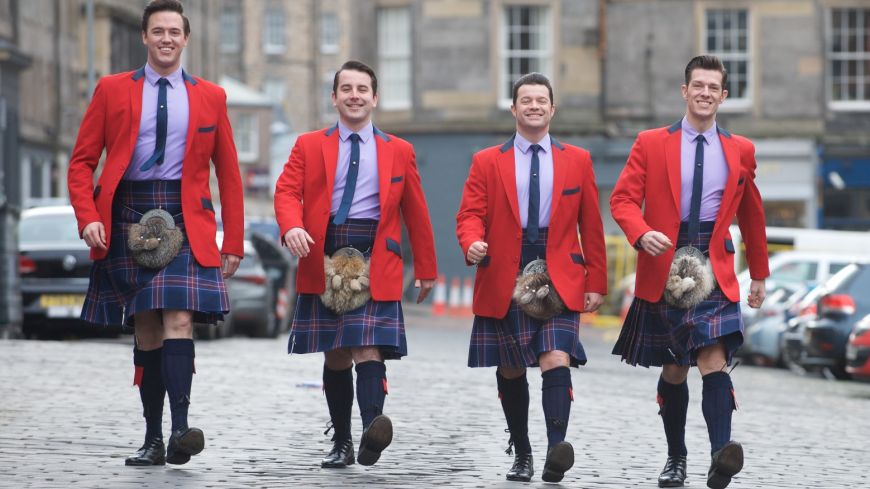 Four boys from Belleville, New Jersey blew everyone away with their one-of-a-kind sound; we now know them as The Four Seasons. This is the story of how this group came to be, all set to the fabulous soundtrack of their unforgettable songs. Jersey Boys is a jukebox musical that stands out from the rest.

From music to set design, this production has 60s flair in droves; those golden harmonies take center stage while Lichtenstein-esque art projections rest ever in the background. The narrative of Jersey Boys consists equally of dialogue and asides played straight out to the audience, the characters playing both actors and narrators of the story behind this epic quartet. At first, the plot rushes the exposition, but that is shown as a ploy so that most of the show can rest right in the middle of the action: when Bob Gaudio joins the group and hits like Sherry Baby and I Love You Baby start rolling in. It’s a rollercoaster ride of rock n roll fame, soaring as high as Frankie Valli’s countertenor falsetto.

Michael Watson, Simon Bailey, Declan Egan and Lewis Griffiths make up Frankie Valli, Tommy Devito, Bob Gaudio and Nick Massi, respectively. Their voices together are a powerhouse, but their chemistry will surely develop deeper over the course of the run. Each is a distinct and well-rounded character in their own right, and they each have their own shining moments- a great ensemble. Michael Watson is just stunning as Valli, his voice as piercing, angelic and powerful as his character’s.

Split into literal Four Seasons (Act I: Spring, Summer; Act II: Fall, Winter”, Jersey Boys shows the arc of the lives of these four music legends in a way that celebrates their triumphs but doesn’t hide their faults. Knowing that Bob Gaudio himself was instrumental in the creation of this musical means that there is this frequently emerging thought of “It-must-have-really-been-like-this” for the audience; however, it is interesting to discover that both Gaudio and Valli maintain ambivalent feelings towards the truncating narrative of Jersey Boys.

Fans of these four crooners will undoubtedly adore this piece, but it is still entertaining for any type of audience member. This is one earwig-inducing night at the Playhouse; you’ll be humming along to Walk Like a Man long after you walk out of the theatre.