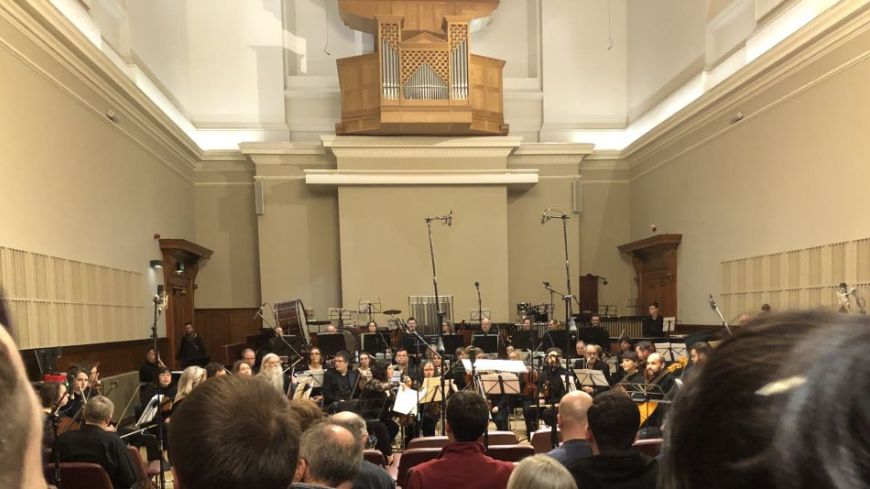 The Edinburgh Contemporary Music Ensemble took a risk with the weather in having a celebratory concert in early January. They were fortunate - we weren't in deep mid-winter and rather, on a wet, mild and windy evening there was a handsome audience in the Reid Hall to celebrate their 15th Anniversary. Of the three who started it, I spotted Dr Jake Spence in the second violins section.

For those not so sure about contemporary classical music, the programme was to finish with a safe and familiar Edinburgh-born Thea Musgrave work of 1988, The Seasons. For me though, the evening was dominated by the compositions of the four writers who were with us in the audience, each of whom took their bow at the appropriate moment.

For many years Tom David Wilson has lectured in composition from his base in Glasgow. Following on from his Concertante 'cello we heard Concertante oboe written for and at the request of oboist Fraser Kelman. Standing in front of the Orchestra, Edinburgh music teacher and freelance performer Fraser Kelman gave us an extraordinary insight into the heights and depths and everything in between of his oboe.

With no soloist and 54 player strong Ensemble alone, Harry Whalley's Strange Cathedrals was inspired by a line from Helen Mort's poem Glacier Song - and geologically long time. In five sections, each was proportionate to the time between momentous occasions on earth: First Vertebrates, Oxygen Rich, Atmosphere, Photosythesis and Heavy Bombardment. Each was a clever and understandable development from the previous. Dr Harry Whalley is Senior Lecturer in Performing Arts at the University for the Creative Arts at Farnham and Composer in Residence at St Vincent's in Edinburgh.

Glasgow born Claire McCue is a talented and prize winning composer. Her In Pursuit was written to explore the range and character of the trombone. What better than to have the pricipal trombone from the Royal Scottish National Orchestra, Davur Magnusson and his counterpart, Simon Johnson, from the BBC Scottish Symphony Orchestra -  the one to the left in front of the Ensemble, the other to the right. But at times they met in the middle and for a minute Davuur was on his knee with Simon standing above him. It could so easily have been a comedy act, but far from it, this was a serious exposition of the trombone. Davuur was playing his alto trombone some of the time. The audience showed its very considerable appreciation at its end.

After the interval we heard the three movement Helicotrema by Edinburgh based Julien Lonchamp. It took the programme notes to tell me that the title is derived from the name of the top of the membrane responsible for low frequencies. It was a sophisticated work and, as often is the case, much helped by first reading the programme notes. Dr Julien Lonchamp is a musician with a career elsewhere - he is Lecturer in Biochemistry with Food Science at Queen Margaret University.

Gordon Bragg, who I know as a violin player but now also a baton waver, can be well pleased with his first outing as the Ensemble's Conductor. In all, a highly successful and enjoyable evening.