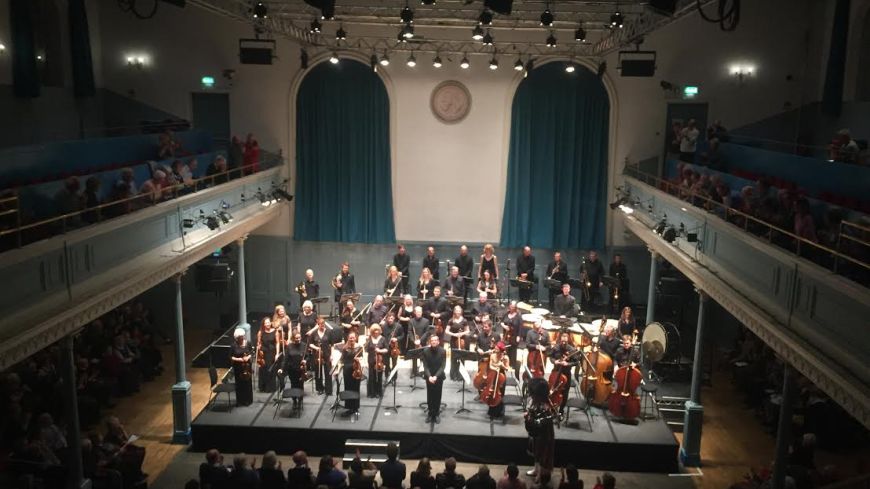 The programme began with Sibelius’ Valse Triste and Scene with Crandes (from incidental music to Kuolema) which he wrote for his brother-in-law’s opera Kuolema. It is not surprising it is one of Sibelius most popular compositions as it is enchanting with many memorable mystical passages.

Conducted with passion by Rumon Gamba it begins with the beat of a double bass followed by tranquil strings, beautifully executed by the violin section. The piece continues to transport us to a magical world with many crescendos and concluded on a peaceful note.

The next composition was by Sir Peter Maxwell Davies who died in March of this year. One of Britain’s foremost composers he lived on Orkney and found endless inspiration from his natural surroundings. His Strathclyde Concerto No 2 is part of his series of ten Strathclyde concertos – each featuring a solo instrument. He was funded by the then Strathclyde Council to write these compositions which were to be used as a teaching ‘tool’ in schools, a commission he would have much enjoyed as was passionate about raising the profile of classical music.

This cello concerto was premiered in 1989 with the SCO and William Conway who performed it again at this concert. Conway collaborated with Max whilst he was writing this composition, making inspiring, ‘expressive’ suggestions which Max worked on. The tone however throughout the concerto is one of foreboding. It also is challenging for the cellist who hardly has a break throughout the three movements. Conway is obviously very familiar with this piece and as a result he successfully interpreted the brooding tones with aplomb.

Bartok’s Divertimento for String Orchestra was next on the programme. Bartok, influenced by eighteenth century composers, incorporated contrapuntal rhythms and his cultural Hungarian roots in this composition. Renowned for experimenting with variations of pizzicato, the string section excelled in delivering superb precision in these passages.

The concert concluded on a joyous note. Maxwell Davies ‘An Orkney Wedding with Sunrise.’ It starts with a flurry of simulated ocean waves crashing onto the rocks and continues like an unpredictable sea.

With distinctive Scottish folk rhythms we are taken on an exuberant musical journey incorporating drunken revelry and the like. To add credence to the occasion the conductor is offered a dram during the performance, after which he continued to conduct in a delightful vivacious way.

Zoe Beyers, the lead violinist, captured the essence of the flavour of a Highland celebration and the piece concluded with a piper marching into the auditorium and playing with the orchestra till the end. A marvellous, celebratory piece of music it received a rapturous response from the audience.