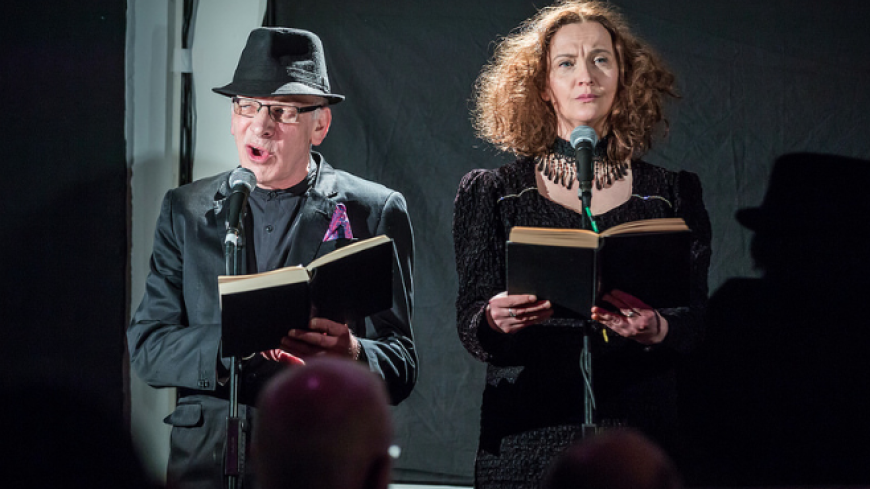 A raucous night of melody and macabre, this blend of cabaret, spoken word, and music rings out its unholy message, “We’re all going to hell anyway, so let’s have a rare ol’ time.”

In a ghoulish and quirky collaboration between A New International and Vanishing Point, this production closes its three-performance run with the weekly Soundhouse series at the Traverse. The audience for this production of A Night At The Theatre transforms into overworlders spending a night below...below in the Traverse bar, that is. The band outfit is robust, even boasting an accordion, violin, brass section, and mandolin. Part gig theatre, part live album, this is a darkly comic cornucopia of 1920s Berlin cabaret, French chanson and gypsy jazz, but with pop flung through and a snippet of punk. All in all, it’s graveyard CAMP, with humour as black as night.

Titles like Dark Carnival rock out a cemetery celebration, and others like The Lover’s Waltz have a more melancholy, tragic feel. There are odes to a grave digger, heretical serenades, sinful yarn spinning a la titles such as Land of No Reply and The Sailors and the Whores. There’s even an outrageous theme song for a reality TV show about the gates of heaven closing for good, Down The Hole, a real laugh for the angels. This collection of songs rouses a grisly, delightful, maniacal menagerie of living and departed, of life beneath the earth. Sparing no oom-pah-pah, this circus has many moments of musical magic, from eerie violin to a veritable New Orleans' style funeral march, trudging in and out of major and minor.

This production’s ringleader is Biff Smith of A New International, deadpan troubadour for the dead, with a mad grin and a voice somewhere between Jack Skellington and Freddie Mercury.

The incomparable Pauline Goldsmith of Vanishing Point, joined by brilliant Peter Kelly, shine as tellers of tales, reciting poetic interludes from their black hymnals and bringing colourful characters [back] to life. (Major Toast the Ghost is a real treat.)There’s room for the band to push even further with the drama, but you can just imagine the misty graveyard and its inhabitants, drinking and dancing their way through the afterlife.

Far from pushing daisies, this production has not seen the end of its days-- this collaboration will premiere as a theatre production in the Spring of 2019.