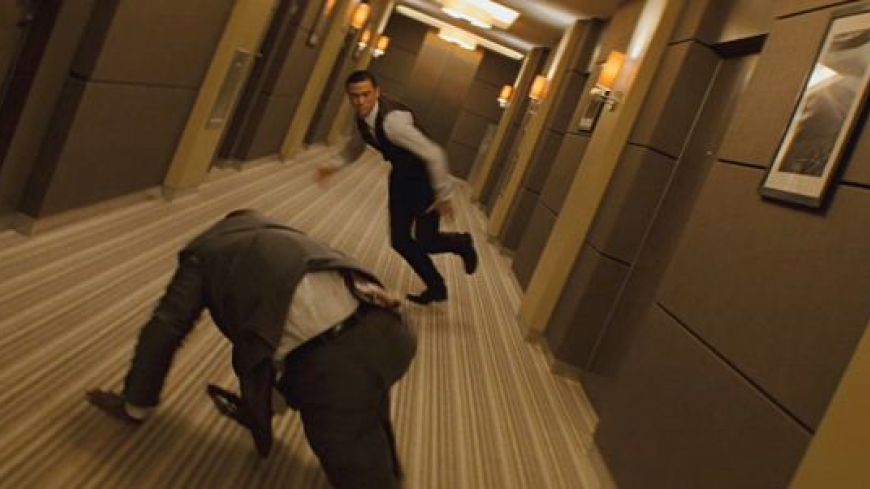 Life's but a walking shadow. (Macbeth)

Is it possible for a work of art to both astonish and disappoint at the same time? Can something be both pretentious and profound or is that an unworkable paradox? Or is Christopher Nolan’s new epic Inception simply, as a better writer than I might proffer, ’a tale told by an idiot, full of sound and fury, signifying nothing’? Well, having seen it I can confidently tell you – I just don’t know yet. Maybe it’s actually an important work, a cultural landmark that shifts the parameters of cinematic narrative and subject matter for years to come.  But more importantly, is it any good after all the hype?

Hmmm. I may have to sleep on it, perchance to dream to find out.

Years ago I saw A personal journey with Martin Scorsese through American films. At the end of the last episode he spoke directly to camera and likened the experience of audiences flocking to cinemas to that of a shared religious experience, the modern day equivalent to the masses of a bygone era attending church. He added, that in his opinion, only two subjects remained that were yet to be seriously examined by film. One was sexuality and the other was the mind.

If Inception turns out to be the blockbuster it expects to be then Scorsese may turn out to be right on the money although his prophecy is yet to be substantially fulfilled. Certainly no mainstream or particularly well known films that I can think of have explored sexuality in any meaningful way (no, 9½ Weeks does not qualify), but there have been a smattering of successful films dealing with the mind and on that count, Scorsese might be right. The obvious culprits are The Matrix, Fight Club, The Manchurian Candidate, The Science of Sleep, Shutter Island and Eternal Sunshine of the Spotless Mind which all spring to.....er , well, spring to mind. I could add Total Recall at a stretch but as daft and as fun as it is, it doesn’t deserve to be in the same club. Inception does however for it left me impressed and slightly reeling but also seriously scratching my head.

The last time I felt that way: psychologically sledge hammered and confused about whether or not the film I’d just seen was any good, was way back in the dark ages in 1987 after catching Blue Velvet for the first time at the Cameo in Edinburgh. I didn’t really know what I felt about it but I did know I wanted to see it again and it took a subsequent viewing for me to realise I was watching a masterpiece. Stumbling once again out of the Cameo and into the rain (and asking myself if it was real) I felt pretty much the same way I had all those years ago but now for different reasons. I don’t expect to be calling Inception a masterpiece after a second viewing but another viewing I want and another viewing I need. You know why? I spent a good portion of it thinking what the hell is going on whilst occasionally scooping my jaw up off the floor.

Without trying to give away too much, Leonardo Di Caprio (in a decent solid performance) plays Dom Cobb aka ‘The Extractor’. He specialises in ‘subconscious security’ but is now on the run from various authorities and corporate clients having stolen some of the ideas he was hired to protect. And yes, these ideas are inside people’s minds. He achieves this with a team of fellow specialists and some hi-tech portable gear by inducing a sleeping dream state in himself and entering into his clients dream world – sharing the clients dreamscape within together.

But ideas and secrets don’t just have to be found and extracted, they can also be planted into the fabric of clients or ‘targets’ minds and this involves constructing artificial virtual reality landscapes and situations which delude the client or the dreamer into thinking they’re in waking reality in a compromising situation in which they may feel compelled to reveal the required information.

When a disgruntled former client turns the tables on Cobb’s attempt to extract secrets from his mind, he offers him a reprieve with one last job. Plant the idea in a rival corporate competitor that makes his company fail and he will see to it that Cobb is repatriated to the US and reunited with his children. Cobb duly assembles a new team to perform this task but hasn’t taken into account the potential for this new operation to be wrecked by his own subconscious and its various unresolved issues.

At least I think that’s what might have been going on. There are various twists and turns, layers of reality and loops of time throughout that, in the main, I was able to follow. But as the end credits rolled I wondered if I’d fully understood how the opening scenes relate to the closing ones, which is maybe the point - perhaps it’s meant to be open to interpretation, much like a dream itself.

My main difficulty with following the various interlinked threads was a subplot involving Cobb’s deceased wife Mal played by Marion Cotillard. This was the only strand in the film where I got lost after contemplating the film’s most important point - which provides Cobb’s motivation for many of his later actions. I was asking myself if the key scene in question had taken place in reality or in the dream world and I felt frustrated as the ripple effect on the rest of the story from this one moment is significant. Perhaps that second viewing will clear it up for me. Strangely as well, in what seems like an odd coincidence or a cruel in-joke, Cotillard who won an Oscar for playing Edith Piaf, now has a role in Inception in which Piaf’s celebrated song Non, Je Ne Regrette Rein plays an important role in waking up the extractors  from their dream state.

This is where Inception works best when the devil is in the detail. It’s the little touches such as this and various inventive concepts that litter the film that make it arresting and compelling. There is a nice concept in which characters are dreaming within a dream and the more layers of dream reality they descend into bring with it a new raft of problems and altered perceptions of the passage of time. This idea is nicely explored in the final act when the clock is literally counting down to what could be certain doom in one level of consciousness but a near lifetime of bliss in another and the viewer has to keep his thinking cap on about how much time the characters have in each dimension to achieve their objective and how their actions affect their other avatars as it were in parallel dreamstates.

It’s basically a tale of espionage, a reasonably cerebral thriller, a mix of James Bond and The Matrix and just as in The Matrix the real star of Inception is the visual effects. The shots of Parisian Streets curling up like a leaf and folding over onto themselves are particularly stunning as is a Zabriskie Point style sequence in which the debris from a series of slow motion explosions surround Di Caprio and his new protégé Ariadne (Ellen Page).

My main issues were the length of the film and the lack of character development which prevented me from experiencing much sympathy for any of the protagonists. It’s a meaty multi layered extravaganza but I felt a little of the fat could have been trimmed, a little exposition curtailed here and there. And just as I felt with Nolan’s The Dark Knight, It could have done with one less action sequence. There is an unfortunate trend in Hollywood these days to top the spectacular perfectly satisfying ending with another even bigger one that drags the story a bridge too far. For want of a more elegant metaphor it’s like eating a whole trifle after you’ve just felt sated by two slices of Banoffi Pie.

I also felt dismayed by not really caring that much about the characters and whether or not they succeeded. They’re not bad people, but they’re not particularly good either and rooting for them when it matters during the film’s climactic multi dimensional dream battle I found rather hard. Cobb is a man who’s essentially trapped by a dubious and criminal past and works with a team of bright, creative and capable assistants but to what end? To steal information?   To bring down a business? Should we really care whether or not they succeed? Probably not. Inception’s simply a high concept rollercoaster about ideas and ideas it has in abundance.

Fortunately many of them are provocative and this will be Inception’s big word of mouth selling point for it will be in the post film discussions and arguments over the plot, the various ideas explored and the similarities and differences the film has in relation to one’s own dream life that will define and create its success. No doubt a sequel could be in the works not to mention a raft of imitations. It is a very good film but just how good I can’t say. But as a potential zeitgeist-like landmark in cinema’s timeline, it might just turn out to be an important one.