Film Review: Neither Wolf Nor Dog 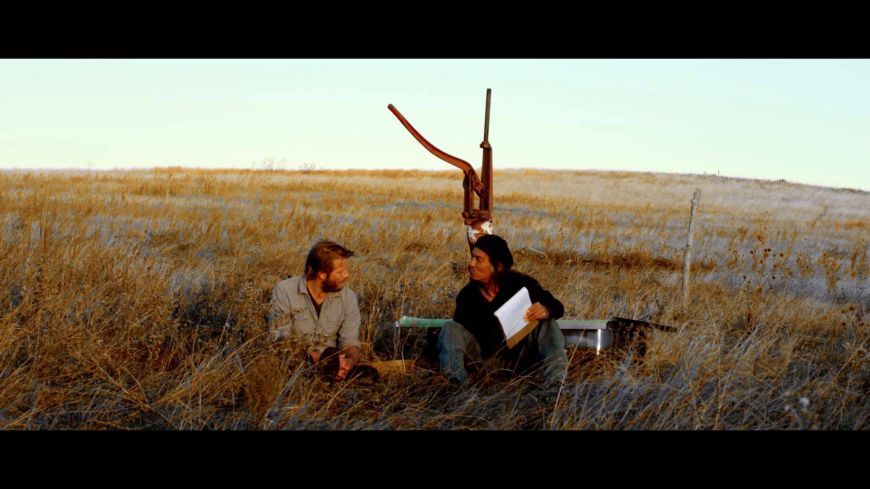 Scottish director Steven Lewis Simpson is no stranger to either the source material for his latest feature nor the guerrilla film making techniques he's deployed to bring it to life. Based on the book by Kent Nerburn, this adaptation by both author and director depicts Nerburn's unexpected journey through Native America's history, culture and landscape.

Nerburn is summoned by Dan, a Lakota Elder who asks him to write a book about his life and his people's history. Feeling unqualified, unworthy and reluctant he turns the offer down but events conspire to draw him back in. After a blundering false start, Nerburn (Christopher Sweeney) is all but kidnapped and taken on a road trip around the Native American landscape. Stopping off at key landmarks, Dan and his companion Grover (Richard Ray Whitman) try to educate him in their ways, encouraging him to see and write the story in his own way without falling prey to white men's guilt-ridden cliches of glorifying an indigenous race.

Dan is played by 97 year old Chief Dave Bald Eagle in a wonderfully honest, no-frills way that only such an elderly semi-professional actor could achieve. His aged face, voice and manner was a joy to behold. A veteran of the D-Day landings, Dave Bald Eagle's worldly experience is etched into his face and being. So good was his performance that when he falls asleep out of boredom whilst listening to Nerburn's first efforts being read aloud I incorrectly thought he'd nodded off for real.

And so the journey unfolds with the three souls pottering from dreary rural shacks to the magnificent prairies of South Dakota and Nerburn's understanding is slowly awakened by his benevolent captors. Relative newcomer Sweeney is the perfect foil to his companions more worldly philosophy playing it with charismatic understatement, a fish out of water, begrudgingly grateful for his new insights and friendships.

Unfurling at a leisurely pace, this is a put your feet up and let it gently wash over you road movie and a real coming of age departure for Simpson. His previous independent features such as the thrillers Ticking Man and Rez Bomb were more pacy action affairs. Here the material is given room to breathe. In one outstanding set piece Nerburn, Dan and Grover drink coffee in a roadside cafe. Their brief rest is interrupted by a begging drunk who repeatedly enters and leaves the cafe. It's both amusing and tragic and without saying very much in the way of dialogue it says a great deal about what has become of some of America's heritage.

That and several others scenes achieve this quality in spite to the film's 18 day shooting schedule. To me this sounds like a breakneck speed to make a feature but Simpson likes to work unfussily with a small crew. Undoubtedly this allows for creative freedom but like many guerrilla style films the low to no budget constraints sometimes show up on screen. This is the case here as well where at times the rough edges make themselves known. Easy Rider came to mind, it too had many rough edges, improvisation and a few sleepy moments yet feels like an edgy film holding the viewer to the end. Now put three guys in a car instead of bikes, subtract the frenetic editing, the rock n roll and the drugs but somehow achieve the same result.

Much of Neither Wolf Nor Dog's power comes from this rawness and the truth of its source. And much of it's beautiful to look at whether it's a landscape or Dave Bald Eagle's solemn face and delivery which is contrasted and complemented nicely by Richard Ray Whitman's spiky sarcastic performance which also deserves a mention. There are many good laughs too and a terrific throwaway punchline and visual gag in the last scene.

But most memorably the penultimate scene at the site of the Wounded Knee Massacre packs an unexpected emotional punch that lingers long after. Apparently tossing the script aside Dave Bald Eagle improvised his dialogue to Christopher Sweeney and the camera simply followed them. Not that much is seen or said but its deeply affecting as they pass the graves that mark the butchering of dozens of men, women and children by the 7th US Cavalry.

All things considered, including its rough edges, its low budget aesthetic and approach, Neither Wolf Nor Dog is an impressive achievement and feels like an important story made with passion and deserves to be seen by audiences beyond the festival circuit.

Neither Wolf Nor Dog received its World Premiere at the Edinburgh International Film Festival earlier this year.