Film of the Week: We Need To Talk About Kevin 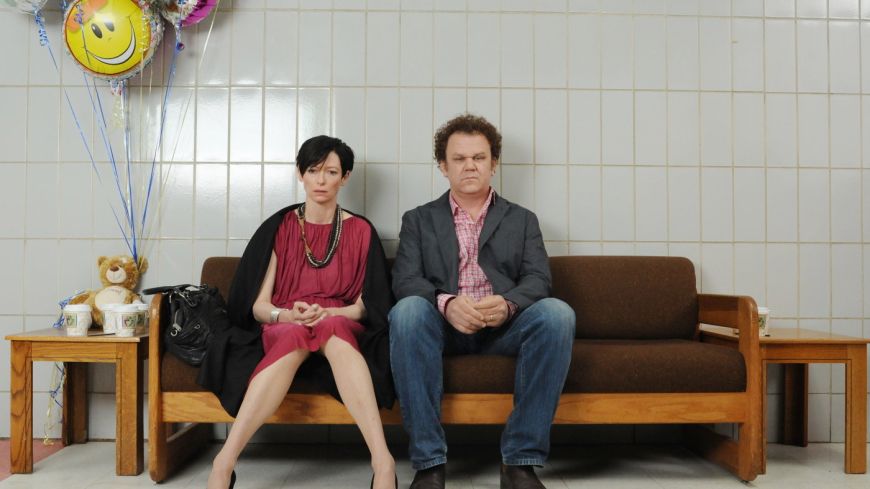 A river of red runs through it. This beautifully crafted and provocative film is stained with the colour, sometimes subtly, sometimes overtly but it’s always there, lurking, threatening and reminding. Alongside Tilda Swinton’s mother role, the film’s colour scheme is a major character, her life and psyche is stained in it. It’s so dominant that in one scene when she wipes red from her face, neither she nor the audience are sure whether it's blood or some red paint from her porch. She seems cursed by it. It’s both a forewarning and a haunting guilty reminder.

Adapted from Lionel Shriver’s novel, the story is weaved around a single moment of horror that defines one person’s life and begs the question: who is responsible for an abominable act of carnage – the mother who may have failed to nurture her son properly or the son who carried out the deed? The film merely asks the question and leaves us to scratch our heads long after.

Swinton plays Eva, who after falling for the charming Franklin (John C Reilly) becomes pregnant with Kevin, her first child. After he’s born and possibly suffering from post natal depression or just failing to ‘appropriately’ deal with her ever screaming baby, her failure to bond with her son goes from bad to worse as the years trickle by. And just to rub it in he’s daddy’s pet. Not only is he overtly hostile to his mother, the father almost never gets to witness his son’s deviant cruelty towards her.

Initially it’s all put down to typical child behaviour and the tantrums that that any child might go through at a particular stage of their development, and to a point we’re sympathetic to all parties concerned. But as Kevin turns into what otherwise might be deemed a naturally moody teenager, it becomes gradually clear that some kind of a line has been crossed.

On one level it’s a sophisticated and well-observed psychological drama and on another it veers towards horror with echoes of The Omen and Rosemary’s Baby. It even reminded me a little of Blue Velvet with its poetic suburban settings, Fifties pop and Lynchian neighbours staring in silent judgement.

We’re continually torn between admiring Eva for soldiering on and trying to make an effort with her cold son as well as feeling sorry for the lad at times, but we’re also exasperated by it all and wish she would just slap some sense into him and straighten him out. And that’s one of the films paradoxes, if she were to discipline him too much would it backfire and make matters worse? Has she not loved him properly or is he just naturally unlovable? Making matters more complex are the rare scenes where they inexplicably exchange brief moments of tenderness, compassion and empathy.

The subject matter might have been profoundly dreary had it not all been crafted with an auteur's vision. The first half hour is a masterclass in technique, an expert blend of direction, performance, art direction, cinematography and in particular in the editing and structure. The film continually flashes back and forth between three moments in time, the origins of it all, the incident of carnage and the impact on Eva's life after the fact. The blurring of boundaries in space and time add to the atmosphere, years of a life all become one moment.

And to Swinton herself. This is a formidable performance. Her elegant and boyish beauty is mixed with repressed rage, bewilderment and moments of steely stiff upper lip stoicism. Her moment of blank faced horror when she realises the significance of her son’s purchase of bicycle locks sent shivers up my spine. What’s also brilliant is we’re never 100% sure if she’s like her son or if she’s just having a really bad day and biting her lip to get through it all. Despite many moments of levity and black humour it’s a demanding experience, but so well crafted it’s well worth the journey.