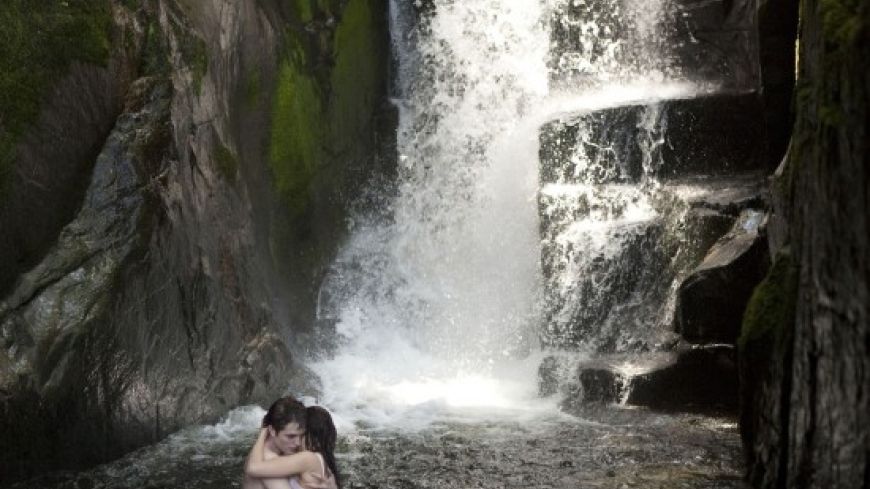 ‘Hmm’ this critic thought to himself as he stroked his chin. ‘Hmm again’ he thought as he appraised the state of his fingernails. ‘Don’t know what to make of this one’ he muttered silently under his breath, removing a bit of fluff from his jacket and watching it drift slowly to the ground.

‘Well I suppose there were some good bits’ he mused and observed that everyone else quickly and quietly shuffled on their jackets at the end, leaving the cinema as if relieved the funeral was over and they could now make their way to the bar to digest this schizophrenic oddity.

A good hour and bit into this film it had been a gentle, quiet and dreamlike fairytale. I was about to start yawning when…….

There comes a moment which reminded me of the experience of seeing Alien for the second time. Watching it knowing what’s about to happen you could tell how many people had already seen it for everyone else is looking around in apprehension wondering why the other half of the audience is murmuring, stiffening up in anticipation, putting their hands over their eyes and nudging their mate as if to say ‘here we go, this is the bit, any moment now’. And that was just John Hurt having dinner.

And so finally came such a moment in Breaking Dawn where a poorly Bella, pregnant with what might be Beelzebub’s spawn starts drinking blood through a straw (like you do when your thirsty). Half the audience went ‘oooh’ and leant forward. Groups of those in the know all grabbed each other and held on for dear life.

The sound on the film went silent just like it always does in horror films before some loud abominable carnage explodes in your face sending popcorn buckets flying. I stiffened and held my breath thinking ‘this is it, this is Twilight’s John Hurt moment’. I could feel the stress lines on my face growing…and….and…..and….NOTHING HAPPENED. At all.

Everyone leant back in their chairs as if thinking ‘oh’. And so my ‘hmms’ began in earnest.

And then ten minutes later without any warning all hell breaks loose as we jump from an uninspiring but watchable PG certificate bore straight into an 18 certificate demon child untimely ripped from his mothers womb, oh my god the needles, the scalpels, the screams, the blood, the CPR, the death, yes the death of the main character – surely not - there’s another film to come isn’t there? – no she’s really dead (or is she?), oh my god and that baby thing bathed in blood is gross and to top it all off a small army of werewolves are outside about to launch an attack. Holy mackerel.

Yes it suddenly turned into Rosemary’s Baby meets the surrealist movement in the space of a minute and I spent the next few moments feeling around on the floor to find my lower jaw so I could reattach it to my face.

From this point on the film was watchable with, as I’ve mentioned, some ‘good bits’. I can tell you exactly what they are. Kristen Stewart is a decent actress with an interesting demeanour and has almost single handedly held the series together. And Taylor Lautner as bad yet good boy Jacob slash angry werewolf when he’s irked comes into his own in this one and is a welcome balancing act to R Patz’s moody goth vampire.

And if there’s one thing all the films have done well it’s a scary dream sequence or a travelling back and forth through time to explain stuff. The montage that comes in this one when Jacob ‘imprints’ himself on Bella’s baby is well done but the only really cinematic thing to happen. There’s also a nifty FX sequence showing the vampire blood reactivating a lifeless Bella (yup, she’s a vampire in the end chaps, get over it).

If you’re an impressionable Twilight fan nothing including this ‘review’ will stop you seeing it. It’s a critic proof blockbuster and although the law of diminishing returns probably applies handsomely here, I’m sure the rest of us will quite happily catch it on telly on a rainy Sunday afternoon in a couple of years.

A word of caution. Breaking Dawn is a 12A but in my mind the childbirth scene was pushing a 15 at least and it might freak young kids out. It might also put them off having children of their own in a decade or two.