Film of the Week: Super 8 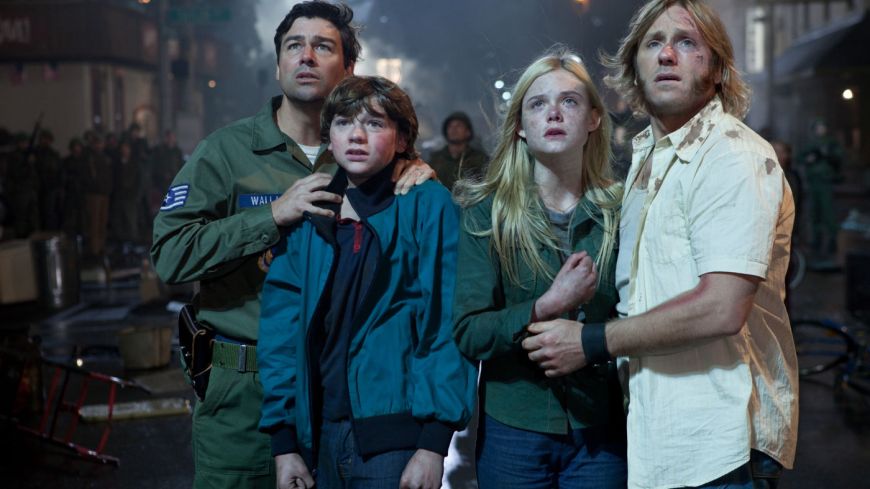 Belying its low budget title, this must be the most expensive love letter to Steven Spielberg ever concocted. It’s a big old-fashioned widescreen epic set around a small town and pays notable tribute to Close Encounters, E.T., Jaws and Jurassic Park. Not one trademark touch or visual motif by the ultimate movie brat has been left on the cutting room floor.

Ironically, as co-producer, perhaps Spielberg made sure his latest protege got his tribute right, perhaps even adding a few whilst on set. I can see JJ Abrams rushing to his mentor’s side asking ‘did I get this right?’ Still, the director’s identity is stamped all over it for every night scene is awash with his trademark penchant for lens flare, added to give cinematic depth and a sense of the epic. All that’s missing are fake scratches.

And alongside all the big-eyed wonder of people turning to look at an unseen spectacle or conversely a horrifying abomination is a profound love of the movie making process and clearly, fond childhood memories of growing up with Spielberg’s classics.

Shame then, that as enjoyable as it is, it all turns out to be a bit muddled. This is a film that’s almost brilliant but just doesn’t quite hit the mark. Perhaps trimming a couple of unnecessary characters and subplots might have helped it to become the emotional rollercoaster and nail biting thrill ride that its early scenes promised.

As a result this is one you might enjoy more if you’re one of the few punters on the planet who hasn’t seen the trailer. Far too much was revealed and if I hadn’t seen it myself, I would have been in much more suspense rather than adding the dots together thinking ‘ok the next scene must be the bit with the…..’ I’ll try then not to add to that dilemma.

In a small Mid West town in the late 70’s, a bunch of adolescent kids are making a gory zombie home movie on Super 8. During an illicit late night shoot; this motley crew of enthusiastic amateurs have to abandon their creative vision and run for their lives when a passing train crashes nearby, spilling a top-secret mysterious cargo.

They miraculously survive this never-ending crash and I mean it’s a miracle. There’s no way on God’s earth you could run beside this ear splitting exploding twisting carnage and live. But some realism persists as at least the kids are visibly traumatised, throwing up, shaking and initially fearful that one of them has perished.

Of course their abandoned camera has continued to record something they haven’t yet seen and the government wants to make sure it stays that way. And so the army shows up, seals off the town and sets about covering up the truth. Naturally the kids spoil their gameplan as one adventure and revelation follows another.

This is a film that didn’t need to go any further than that. Somehow, too much gets added along the way. It’s a shame because the first hour is engrossing right from the opening whose unexpectedly sombre scenes are beautifully done. They quickly and cleverly introduce us to the principal characters and emotional dilemmas that run throughout.

This is both Super 8’s strength and it’s failing. The photography and production values of the period are exquisitely done, the attention to detail superb. And there’s great dialogue with wonderfully engaging naturalistic acting by the kids including a standout performance from Riley Griffiths as Charles the young wannabe film director. And that’s how it should have stayed, the entire thing should have remained from their point of view.

Instead, too many adult characters are weaved in with Speilbergian subplots to do with neglectful or absent parents, which are required for the film’s emotional payoffs. They lose much of their impact because we spend too much time following their adventures as well.

But it is worth seeing and there’s plenty to enjoy all the same. There are some marvellous touches and on occasion there’s a palpable sense of awe, wonder or fear to be enjoyed mainly by those of us who grew up with Spielberg’s briefly glimpsed monsters and dances of light.

A final note of caution: on top of all the harmless lens flare, this 12A certificate continues the modern trend for suddenly loud bloodless horror and some genuinely nerve jangling scenes. This comes with a concoction of the Alien/Predator variety and I think if I were an impressionable youngster, I’d have peed my pants before leaving the cinema.