Film of the Week: Fast & The Furious 5 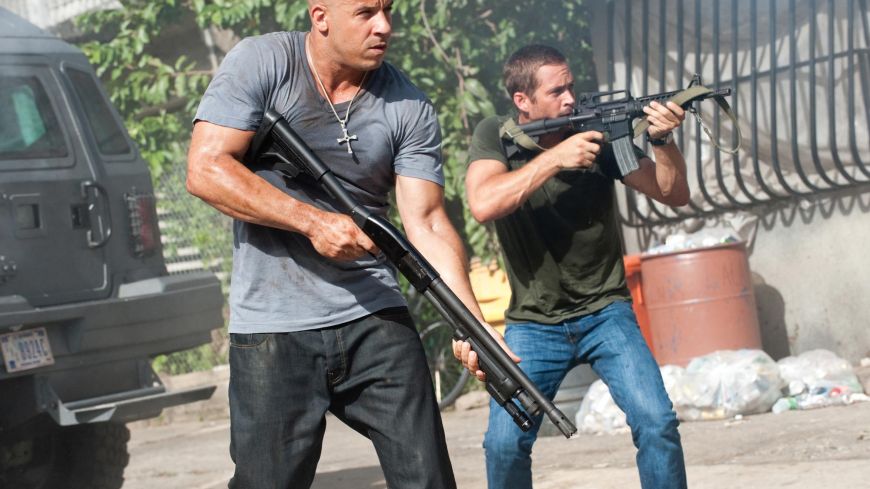 Ripping off the quote heralding the sinking of the Titanic, a gun-toting minion turns to his boss and says ‘Even God himself couldn’t crack this safe’. The boss replies ‘It’s not God I’m worried about’. And he’d be right for when you’ve got Vin Diesel & Co on your case there’s not much you can do but stand back and watch the splendidly choreographed destruction.

This is something of a departure for the franchise and the best of the bunch. Amongst its many set-ups is an impressive ambush sequence, an outstanding car chase finale and Dwayne Johnson aka The Rock is, well, pretty damn good to be honest. Fast Five (as its known in the U.S.) is a huge sprawling much more ambitious effort bordering on the epic and I suspect its box office haul will comfortably outstrip its predecessors.

The plot is fairly irrelevant because it serves one purpose and one purpose only, as the set-up for each action scene. If anyone wants a template for success rather than artistic integrity then look no further. No convention or cliche is left unexploited, no amount of lame macho dialogue is left unwritten and it throws in enough sexy ass wiggling to thumping rap music to keep the target demographic distracted.

I barely remember film number four but I guess at the end of it the usual suspects are on the run from the law again. In fact Vin Diesel, car jacker extraordinaire isn’t on the run, he’s been caught and is in a jump suit in chains on a bus bound for jail.

Barely have we registered this when ex-cop Brain O' Conner (Paul Walker) and Mia (Jordana Brewster) drive alongside and force the bus to overturn to spring their buddy. It’s a spectacular stunt but ridiculous because while you watch the coach endlessly flip over one thinks: ‘wouldn’t a crash like that kill everyone on board?’

Fear not dear reader for a prompt newsflash lets you know everyone survived without a scratch. It’s utterly ridiculous but this is a series that’s evolved on pure spectacle with tongue slightly in cheek. Enjoying these films requires suspending a lot of disbelief and going along for the ride.

Next up they’re stealing cars from the back of train in a scene that owes everything to Mad Max Beyond Thunderdome. It’s quite well done and full of improbable stunts.

So with Diesel sprung the trio make their way to Rio to hook up with rest of the family/gang/oh who cares they just go there. Wasting no time they decide one final job to bring down the local mafia boss is required to free up some petty cash. They’re bad guys but they’re going up against even badder guys so that’s OK. Isn’t it? That makes it, er, moral, doesn’t it?

The ‘good guys’ naturally decide to put a stop to this naughty bunch. Enter The Rock, all muscle and tattoos. He heads up an elite task force with state of the art surveillance and weaponry. Johnson’s easily the best thing here. He swaggers into every frame like a cross between John Wayne and Schwarzenegger delivering his lines like his life depends on it. Fortunately he has the best lines which I admit isn’t saying much. The film’s dialogue conveys the minimum exposition required and then they get on with driving really fast and blowing stuff up.

With the rest of the cast members from the previous films assembled it quickly turns into a hybrid of The Italian Job, Jason Bourne and Oceans 11.

Inevitably the final set piece arrived and to my utter surprise I found myself twisting in my seat quietly mouthing expletives for they’ve pulled off one of the best car chases committed to film. It doesn’t top The Bourne Supremacy or Ronin for style but it exceeded all my expectations. It involves two cars towing a giant bank safe through the streets of Rio and the inevitable destruction it wreaks on cars, trees and buildings is pretty breathtaking.

The film’s a tad overlong and its let down by over reliance on CGI to enhance the action, but its compensated for by a decent soundtrack and some impressive location work around Rio’s notorious favelas.

The makers of this one have clearly set their sights on creating a long running Bond-esque style franchise and with this one they may have just pulled it off, for this is one highly entertaining dumb ass movie and on a couple of occasions, surprisingly thrilling.