Film of the Week: Armadillo 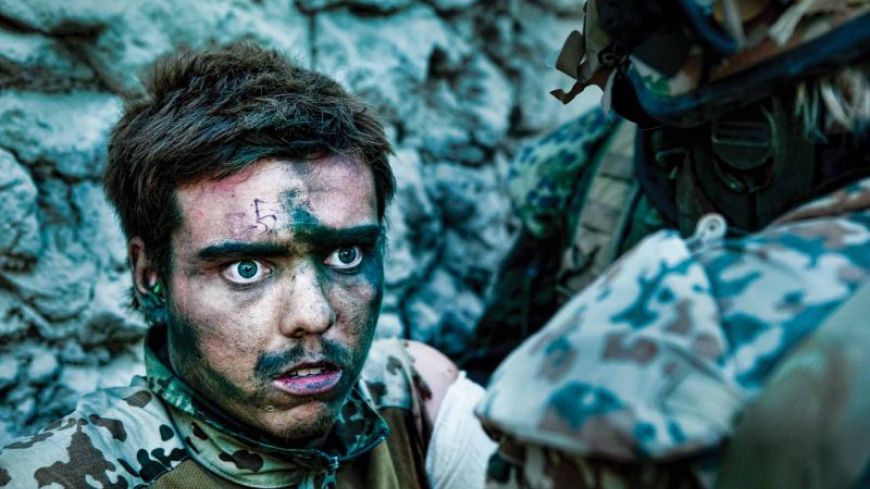 A year after the brilliant, garlanded and controversial fly-on-the-wall-war documentary Restrepo, along comes another on almost identical lines but with its own brand of brilliance and controversy. Both films are remarkably similar in structure and content but technically, tonally and aesthetically are strikingly different.

Whilst co-directors Sebastian Junger and the late Tim Hetherington captured the minutiae of life in a combat zone in Restrepo, Danish director Janus Pederson has done likewise but with such production values that at times I wondered if I was watching a scripted drama with an art department on standby.

If Oliver Stone had made Platoon as a documentary this is what it might have looked like. Clearly the influence of landmark war movies and I suspect the Iraq sequences in Fahrenheit 9/11 have heavily influenced the style of the finished piece. Even its sumptuous and occasionally frightening soundscape evokes Apocalypse Now.

Indeed the lesser of the films two main controversies is this very fact, the distinction between what may have been set up versus what was candidly caught has been questioned by the media, such is its technical slickness. It’s both a fly on the wall exposé of the blundering nonsense that is a war zone as well as a disturbingly visceral and aesthetic thrill.

One can argue the merits and morality of turning real life horror into an immersive cinematic experience which is as ‘enjoyable’ as it is illuminating but there’s no question here that it’s been done brilliantly by filmmakers who know what mood they want to create. The film even cuts between a video game of combat and real battle underlining the artifice of the film and the connection between the virtual and the real.

The film begins with the soldiers standing to attention under a grey sky in Denmark. Grim and worried looking young men, not yet comfortable with a camera in their face. There’s a farewell party and in the films most moving scenes the tearful and worried goodbyes of loved ones.

Upon arrival at the forward operating base in Helmand (from which the film takes its title), the speed at which the initial greetings and nervous camaraderie gives way to tense faces is lightning fast as the realities of what they’re about to experience sinks in.

Within half an hour one starts to feel one really knows and cares for this (fortunately) likeable handful of men as the months roll by, as the novelty of routine wears off and as the reality and repercussions of infrequent, brief but intense combat frazzle the nerves.

As one of the soldiers commentates, ‘there’s no point in going to the funfair if you don’t get to go on the rollercoaster’ and both they and the audience get to ride it more than once.

As with Restrepo, Armadillo shows the bungling and misguided attempts to win the hearts and minds of a local population furious at the men tramping on their crops, accidentally killing their cattle and demolishing their homes. A little girl is killed (unseen) by a grenade and the soldier responsible sits slumped staring into space unable to comprehend what he’s done.

And really this is the heart of the film, seeing grown men, trained soldiers struggle to rationalise and justify their actions. It's not stated, it's simply etched into the faces, their flickering eyes and downward glances belie the bravado.

The main setpiece is a brief but extraordinary battle sequence with a moment of unbearable tension that wouldn’t be out of place in a Hitchcock or Speilberg film – what would in fiction be a brilliant storytelling device of misdirection here turns out to be a moment of reality.

I covered my mouth as a handful of the men fire across a ditch at an enemy they think is far away only to be told over the radio that the men they are fighting are actually in the ditch in front of them. The aftermath of this incident is not for the faint hearted and is the source of much debate, causing a furore in the Danish media and government.

Whatever your opinion as you walk away, what’s for sure is that Armadillo is another trump card in the growing arsenal of war documentaries, shedding unwelcome but necessary light on the un-winnable wars of attrition around the globe. It’s quite an astonishing artistic achievement and for all its (possible) artifice and controversy, a must-see.