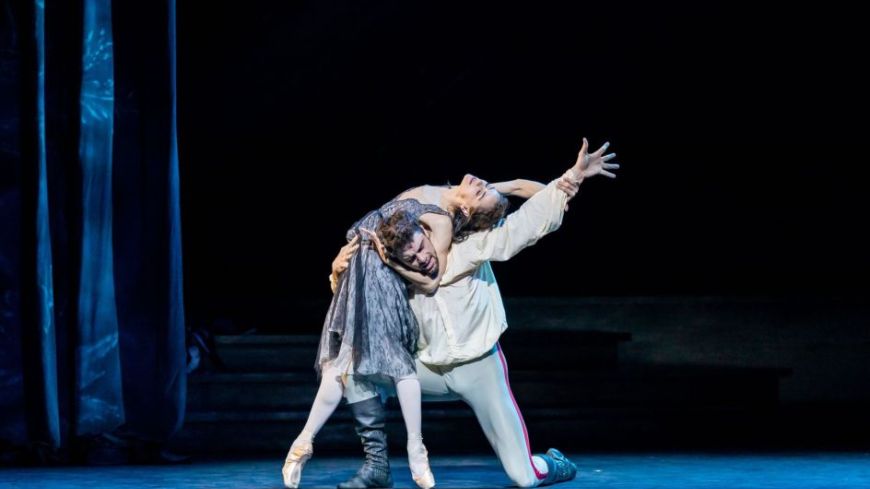 Originally created by Kenneth MacMillan for the Royal Ballet in 1978, this fresh, re-imagined and distilled dance drama is based on the true story of Crown Prince Rudolf of Austria-Hungary.  Desperate to reject his regal life of wealth and privilege and trapped in an arranged, unhappy marriage, he began an illicit love affair with 16 year old Mary Vetsera.  On January 30, 1889, they were both found dead at the Hunting lodge, Mayerling but the scandal of the murder-suicide pact was quickly hushed up by his distraught family.

A prologue, simply staged with just a hansom cab, priest, two mourners with black umbrellas in a graveyard at night, gives a brief, bleak taster of the tragic tale to follow.  Then the action time travels back several years to the wedding of Prince Rudolf and Princess Stephanie amidst the opulent, chandeliered grandeur of the Hofburg Palace, where a whirl of elegant guests waltz around the ballroom. Ignoring his wife, Rudolph flirts with his sister in law and a former mistress, while the outrageous behaviour is witnessed by his furious parents.

In a scene reminiscent of Hamlet visiting Gertrude in her boudoir, Rudolf goes to see Empress Elizabeth desperate for motherly affection and understanding. Tall, slender and elegant in a grey slip dress, Marge Hendrick has a chillingly cold manner as they dance awkwardly, keeping her distance and then pushes his hand off her arm in disdain.

Rudolf is a disturbed young man in reckless pursuit of women, drink, drugs and revolutionary politics with a morbid fascination with death. In his apartment, he shows Stephanie his prize possessions, a skull and a revolver, much to her horror. Their electrifying, energetic duet is far from sweet romance on their wedding night: she throws herself into his arms, but he just picks her up and tosses her aggressively on to the kingsize bed.  Now in a deteriorating state of psychosis and addiction, he is clearly mad, bad and dangerous to know.

MacMillan’s clarity of choreographic storytelling focuses on characterisation with psychological insight and private emotion in a way which only dance can express. Evan Loudon portrays the Prince’s disturbed mind set, shifting from an outburst of anger to quiet moments of despair in such an intense performance we can understand his mental breakdown.

The principal dancers display extraordinary flexibility to rival Olympic athletes, matching agility with balletic grace and pace. The passionate pas de deux between Rudolf and Mary is extremely physical and intimate, as he lifts her onto his shoulders and she wraps herself around him in a tight embrace.  With gleeful, girlish charm, Sophie Martin shows the innocence and vulnerability akin to Olivia Hussey who was just 16 when she played Juliet in Zeffirelli’s 1968 film.

The stage setting moves seamlessly from the Palace ballroom to a tavern, boudoir and bedroom with effective minimalist design on two levels, framed by blood-red painted wood panels. Most poignantly, a giant photograph on screen illustrates the Hunting lodge at Mayerling. Costumes are colourful and stylish from glamorous satin gowns and official Royal uniforms, to maids, chorus girls and courtiers, each role neatly played by the ensemble of Scottish Ballet.

At around two hours in duration, ‘The Scandal at Mayerling’ is a short, sharp, crisply choreographed, dynamic narrative ballet, astutely and theatrically performed with passion, punch and panache which captivates the audience from the overture to curtain call.