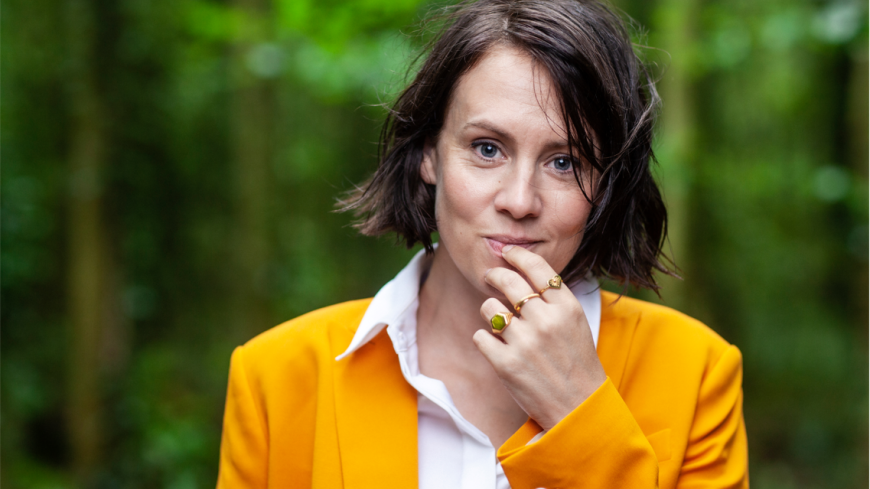 From Edinburgh to Glasgow, Dundee to Inverness, 20 young people from 15 different locations across Scotland will come together to present Revolting by award-winning performance artist and renowned theatre-maker Bryony Kimmings for one night only at the Traverse Theatre on Friday 22nd April at 7:30pm.

This youth board production transform this play from page to stage, having first accessed the piece via working on it remotely through dramaturging the Season Two programme of Positive Stories for Negative Times, produced by Wonder Fools in association with the Traverse. This will be the first time the company come together in a physical space; transitioning the piece into a live work.

Revolting is a paint-by-numbers, self-generating play that asks you to imagine a new system, a new world, a fair one, with better prospects and more equality…and flying cars and free money and loads of dancing and pizza parties and solutions to climate change. It is for anyone feeling powerless and in need of a bit of hope this Spring.

Positive Stories for Negative Times launched as a first season in August 2020 as part of the digital Traverse Festival Programme, and was created as a direct response to the lack of physical spaces for young people to participate in performance, and the detrimental impact this was having on their mental health and wellbeing. A staggering 2,607 young people and 282 groups spanning from the Outer Hebrides to Madrid, and York to Quebec performed the first season’s plays - making way for a new raft of artists and groups to get involved later this summer. Submissions for Season One are still available to watch on the project website.

Season Two, aimed at engaging an even broader network of people aged between 6 and 25 was created with a focus on coming together, embarking on new processes and changing the way people think about theatre for young people. Wonder Fools and the Traverse Theatre once again co-commissioned a new group of the UK’s most prominent artists to create new work relevant to the here and now, that included Bryony Kimmings, which acted as stimulus for creative projects for young people around the world. Participating groups were based in countries such as the UK, India, Italy, the Netherlands, Portugal and the USA, making it a wholly international project.

In reference to Revolting being presented by young people, Bryony Kimmings shares,
"I am so elated that the Wonder Fools Youth Board are putting on their unique version of Revolting at the Traverse, it’s a venue close to my heart! The best thing about being part of this collection of works is that access to the plays is free! Young people are the key to saving this planet… if I can inspire them to take a stand and change things that aren’t right,then my job as an activist writer is working!"

Talking about presenting pieces of work from page to stage, Wonder Fools said,
"The Positive Stories Youth Board was created to make sure that young people had a voice within the theatre landscape and specifically within the commissioning of new plays; from working with writers on early ideas to dramaturging the plays.

We’re excited to see one of those plays be brought to life by the youth board at the Traverse Theatre. They are such a brilliant, astute and talented group of theatre makers and to see them connect and collaborate in real life for the first time is going to be a joyous and celebratory moment for all.’

Tickets are £5, with a concession of £3, in line with the company’s ethos of making theatre accessible for all
To find out more, visit:
https://www.traverse.co.uk/whats-on/event/revolting-a-youth-board-production