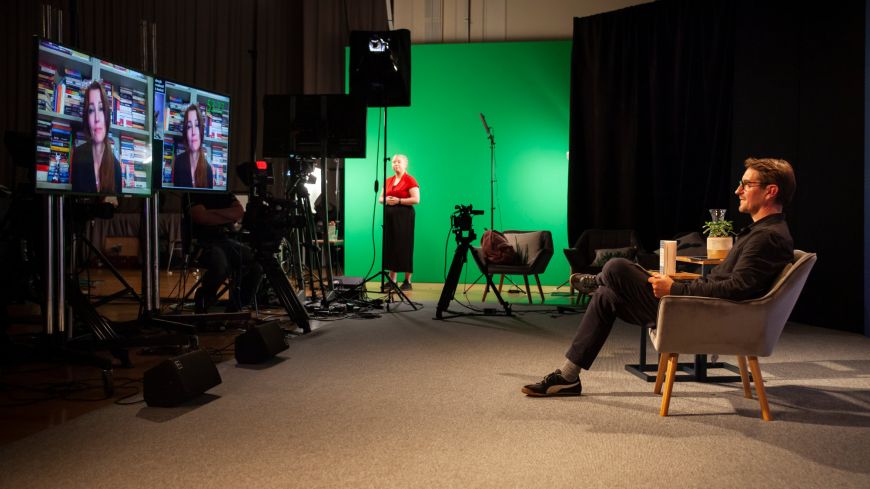 After Covid-19 struck in 2020, the Edinburgh International Book Festival scrambled to re-invent itself as a purely online offering based out of the Assembly Rooms.

With Covid-19 restrictions lingering, this August, the Book Festival takes up residence in a new venue in the South of the city, Edinburgh College of Art, with a hybrid live-online festival format. Its programme of 250 events will be available online on a pay-what-you-can-model, along with recordings from previous years of the festival.

A limited number of in-person tickets for selected events will go on sale at midday on Thursday 22 July.

Almost half of the speakers are planning to appear in person in Edinburgh, while others are joining digitally from their homes around the world.

The festival will look to recreate some of the festival buzz that characterised its traditional New Town venue in Charlotte Square Garden.

Nick Barley, Director of the Edinburgh International Book Festival, said: “In our new home at Edinburgh College of Art we have created three broadcast studios, two of which can accommodate limited audiences.  These new facilities enable us to offer author conversations to worldwide audiences and to those closer to home who are unable to join us in person, as well as welcoming a limited In-Real-Life audience.”

On dealing with Covid restrictions Barley said: “The Book Festival is at the forefront of the re-emergence of public events, and we have a duty of care to our authors, audiences and staff.  It is important that we help rebuild confidence and we have therefore chosen to retain 1metre social distancing for audiences in the studios. This gives us a reduced capacity of 100 in the New York Times Theatre (in Sculpture Court) and 60 in the Baillie Gifford Theatre (in West Court).”

Added Barley: “Outside in the courtyard we are recreating the ‘village green’ element of the Book Festival that our audiences enjoy with a bookshop, café, family play area, seating spaces and a big screen upon which a number of the live events will be shown. The Book Festival has always aimed to be an oasis of calm and, as ever, this will be a space for audiences to chat, relax, read a book and while away the hours in the summer sunshine.”

The 2021 International Booker Prize-winning author David Diop and translator Anna Moschovakis also discuss their winning novel and the winners of the University of Edinburgh’s James Tait Black Prizes are announced in an event celebrating all the shortlisted authors.

Former Prime Minister Gordon Brown, Ed Miliband, and Gavin Esler will be talking politics, while Alex Renton and Lisa Williams, founder of the Edinburgh Caribbean Association, reflect on the legacy of colonialism and Empire and Sathnam Sanghera shares his views on how Britain could better reflect the realities of its imperial past.

Dan Hicks, professor of archaeology at the Pitt Rivers Museum, explores the case for repatriation of colonial museum collections and Hans Ulrich Obrist, Artistic Director of the Serpentine Galleries, discusses the role of art as a catalyst for change.

After 20 years of the War on Terror Nick Bryant, the BBC’s New York correspondent, joins Helene Cooper, The New York Times’s Pentagon correspondent, to discuss whether intervention can ever be humanitarian.

Kate Aronoff and Pulitzer Prize-winner Elizabeth Kolbert offer new perspectives on how we can face the challenges engulfing our planet.

GP Gavin Francis and palliative care doctor Rachel Clarke, both with frontline experience of the NHS response to Covid-19, are joined by novelist Kate Mosse who has been caring for elderly family members throughout lockdown, to share their personal experiences of the pandemic.

Authors bringing brand new releases to Edinburgh this summer include Joan Bakewell who explores the implications of downsizing, Eimear McBride with her first non-fiction release, Matt Haig with The Comfort Book and new novels from Pat Barker and Elif Shafak.

Poet Kathleen Jamie is joined by Don Paterson and Peter Mackay to launch The Golden Treasury of Scottish Verse and Lavinia Greenlaw introduces her memoir.  Better known for his gripping TV productions, Jed Mercurio has collaborated with Prasanna Puwanarajah to create Sleeper, the first in a hotly anticipated new graphic novel series.

Ali Smith who introduces Art in a Time of Lies, a new film made with Sarah Wood, footballer Pat Nevin in conversation with Val McDermid who also launches 1979, the first book in a brand-new series and Alan Warner whose Kitchenly 434 is also set in the 1970s.

To coincide with her exhibition at the Scottish National Portrait Gallery artist Alison Watt is joined by Andrew O’Hagan to discuss the importance of influence.  Scottish crime writers Doug Johnstone, Ambrose Parry and Mary Paulson-Ellis all introduce their new books and Abir Mukherjee discusses the latest in his series set in Calcutta.

Scottish writers with new books set in Scotland, some written in Scots, have been partnered with six young Scottish filmmakers to create short films evoking the spirit of the setting and mood of each novel.  The authors include James Robertson who launches News of the Dead with a film by Anthony Baxter, Graeme Armstrong whose debut novel The Young Team has been interpreted by James Price, as well as Shola von Reinhold, Helen McClory, Jen Hadfield and Ross Sayers.  The films, which premiere at the start of each partner author’s event, were supported with £120,000 from Scottish Government’s Festival’s Expo Fund.

The Royal Lyceum Theatre Edinburgh returns with special one-off interpretations of Sea State by Tabitha Lasley, The Long Drop by Denise Mina and a new writing commission, The Yellow Door by Kathleen Jamie.

Author Jenni Fagan has worked with the Stellar Quines Theatre Company and actors from the Citizens Theatre WAC Ensemble to create a new adaptation of You’ve Never Slept in Mine by Scottish author Jessie Kesson, which will be performed as a rehearsed reading.

Songs from Scotland celebrates the poetry of Edwin Morgan in a choral arrangement composed by Gavin Bryars, co-commissioned by the Book Festival and Celtic Connections, and premiered by Glasgow ensemble Capella Nova.

Jenni Fagan also undertakes a series of walking tours through Edinburgh’s Old Town and shares the secrets and places that inspired her latest novel Luckenbooth.  Other walking tours around the city, a new venture for the Book Festival this year, include a fun family trail around the Meadows in the company of Macastory, a Black History Walking Tour led by Lisa Williams and a self-guided city centre tour which has been developed alongside Tollcross Community Action Network together with photographer Alicia Bruce and Writer in Residence Eleanor Thom as part of the Book Festival’s Citizen project.

The Citizen project, supported by players of People’s Postcode Lottery through the Postcode Culture Trust and through the PLACE Programme, is committed to diversifying audiences and expanding engagement across Edinburgh.  Events in the 2021 programme include Stories & Scran which returns with a community meal for Citizen participants, followed by a showcase of readings, stories and short films, and a celebration of the new edition of One City, scheduled for publication in early 2022, with contributors Irvine Welsh, Anne Hamilton and Ian Rankin.

Award-winning theatre director, Ross MacKay heads up R-Words: Infectious Poetry for Everyone tracing the spread of his idea to infect people with poetry from conception to completion in a nationwide game of poetry consequences.

The Book Festival’s new home at Edinburgh College of Art will have a children’s play area, a selection of children’s books in the Festival Bookshop and a big screen in the open courtyard showing events from across the Baillie Gifford Children’s Programme, including dancer Oti Mabuse who makes her debut in Edinburgh with a virtual interactive dance-along.

A discussion with 19-year-old climate activist Mya-Rose Craig, Faridah Àbíké-Íyímídé with her debut novel Ace of Spades and Juno Dawson, on growing up trans, are amongst the events for Young Adults.

You Can! the new picture book from author Alexandra Strick and illustrator Steve Antony is at the heart of an interactive event suitable for everyone including those with learning difficulties, created with the support of PAMIS.

New for 2021 are a series of pre-recorded audio-only events, available from the very start of the Festival, which include Jeffrey Boakye whose event around Musical Truth has an accompanying playlist, M G Leonard with a new book about a bird-spotting detective, and Nicola Morgan who shares her thoughts on how teenagers can look after their mental health.

In a series of special events for industry professionals, the Book Festival presents The Business of Books. Bringing together publishers, booksellers, editors, agents, writers and arts professionals, these free events explore the future of the publishing industry from Rethinking Diversity to Creating Book Events for People with Learning Disabilities.

In addition, there is a masterclass on Book Cover Design and a Scottish Publisher Showcase, also in the public programme, giving audiences a taste of the breadth of Scotland’s vibrant publishing landscape from the shores of Leith to the Isle of Lewis.

Edinburgh International Book Festival takes place at Edinburgh College of Art from Saturday 14 to Monday 30 August 2021. In-person tickets for selected events will go on sale at midday on Thursday 22 July on EIBF website.