Upcycling to Zero Waste on The Fringe 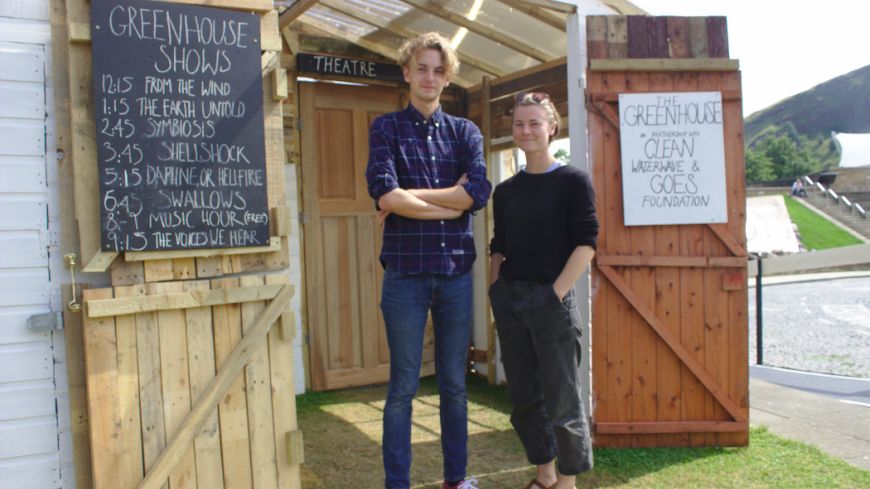 The posters, the fliers, the endless disposable plastic cups and food trays: there’s no denying the Fringe generates a lot of land-fill.

Unnecessarily so, as well.  At least, that’s what BoxedIn Theatre company intend to show with their “zero waste venue”, the Greenhouse.

Located on the grass at the entrance to Our Dynamic Earth, the DIY, pop-up wooden theatre is the culmination of a year and a half of planning by a group of friends who met at the University of St Andrews.

The company is eschewing all forms of paper marketing - relying on online media and word-of-mouth. “We don’t even print our own tickets,” says one.

Above all, they set themselves the task of building a venue from upcycled and reused materials, down to the screws. They found the metal truss that supports the theatre building, advertised on secondhand web site Gumtree.

Caelan Mitchell-Bennett said it was missing a few screws, but they were able to replace them with reusable parts.

The roof is made of a corrugated, transparent plastic and the walls are made of planks of wood and pallets, each individual piece sawn by hand.

I ask what part of the construction they are most proud of. Lucy Reis says it would be re-purposing a garden shed that was rotting away in someone’s garden, and “really reaching its end of life”.

In spite of having doubts about the shed’s viability, they eventually used it for the box office.

Inside the theatre is a compact and intimate space, but big enough to seat an audience of thirty. With its patchwork of wooden panels it has the couthy feel of a bothy. It also has a tall roof, so feels light and airy. At least, when the sun’s out. Being Zero Waste means no lighting, because no electricity from the grid. It means the final show of the day, a post apocalyptic drama, ends in darkness.

There’s a small stage on your left as you enter, and a second door, at the the far wall where we later exit out. The four performers in the first show, a verbatim drama about wind energy in Fair Isle and Lewis, began in chairs in the middle of the space and the audience sat on either side on wooden benches.

It’s a charming little theatre space and with its angular, wooden walls it has good acoustics. The only problem is they are not thick enough to keep out the grating engine sound of tour buses visiting the Dynamic Earth building.

With the sun out it was quite warm, but not uncomfortably so for this afternoon half-hour show.

BoxedIn says that most of the construction materials were sourced within a 30-mile radius of Edinburgh, and the building was constructed in Edinburgh. However, it wont be til next year that they solve the low carbon aspect of the project by using electric vans for transporting materials. Ideally, those tour buses will go electric too.

Another venue which gave us a brilliant example of how to upcycle last year is Pianodrome. You may remember the 100-seater amphitheatre in the Botanic Gardens, built entirely from disused pianos. They rescued the pianos from a piano mover, who otherwise would have had to burn the instruments. A sad thing, when you consider the craftsmanship and the quality of the materials of some of these pianos.

This year Pianodrome have moved into the Pitt Market in Leith, and have built a theatre in the round, using pianos again for the seating in the auditorium. It’s an impressive sight.

Pianodrome at the Pitt is open from 11am everyday and there’s live music programme from 7pm to 10pm.