The Little Glass Slipper as Performed by the Queen of France and Her Friends, online, Review 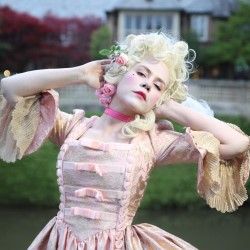 Here we are, it's the end of the French aristocracy, Marie Antoinette is putting on the play we know as Cinderella to a closed invited audience and beyond the palace walls the people are rising up to bring the whole shambolic edifice down, what could possibly go wrong?.

It's a play within a play and shot as a stage production. The cast perform on a simple set and its minimalism combined with shots of decadent architecture and art contemporary with the revolution creates an effective performance environment.

There's a real poignancy in the staging of the play, the players in their roles, indifferent to the uncultured masses try to rationalise the impending doom which presents itself. The reports of the storming of the Bastille and subsequent murder of the royal classes sends shock waves through this enclave, with some seeking to save themselves whilst other remain loyal to the queen.

The decay and demise of this effete group seems inevitable, but the queen is portrayed as being ignorant, then delusional, then ambivalent and finally resigned to the fate which awaits her.  There are echoes with our own society with all its failings and widening disparate economic groups.

The performances are both parody, comedy, tragedy and realistic in their delivery and they all possess a surreal and engaging quality. The queen's innocence, instability and isolation is beautifully delivered and controlled. And the fractures and breakdown of the royal household under the surrounding pressures is beautifully recreated by the rest of the cast.

The disintegration of this society, and the exposure of its demented failures is compelling, and the ending is both epic and wonderfully choreographed.