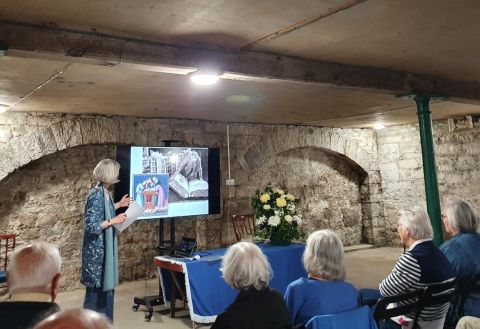 Helen White’s talk at the Sacred Arts Festival had been much awaited – the complications of Covid having previously intervened.

We learnt not only about the history of Illumination (the art of applying gold or silver to paper or vellum), but also how it is done. The central idea clearly hinges on reflecting the light, and thereby ‘illuminating’ an otherwise plain written page. We were shown numerous examples of mainly medieval manuscripts, by virtue of a thoughtfully prepared PowerPoint presentation. While originally confined to the monastic setting, we discovered how a gradual increase in literacy prompted greater demand for illuminated texts for more person use. Manuscript making thus moved out of the monastery into the workshop, and enjoyed increasing interest until the printing press came.

The examples demonstrated well how illumination adds so vividly to the beauty and quality of artistic decoration. Considered in context, we were left in no doubt that these works were nothing less than remarkable achievements for often one sole artist, especially given the intricate detail on sometimes small pages. The birds depicted we saw depicted in the Alphonso Psalter are so accurately drawn one can instantly recognise the species; similarly, in the Luttrell Psalter, the scenes of everyday life are disarming in their realism, and are remarkably drawn.

The speaker talked about how her own interest in Illumination had been fostered and furthered – we learnt about the close relationship to the study of geometry, and how the art itself is intrinsically spiritual. Practically, we were shown how the gold was applied, both as leaf or from powder. That a sticky gesso base could first be prepared, enabled the more advanced production of a 3D design. The striking thing that came across was not only the amount of time the application itself demanded, but also the preparation and patience required – grounding the ingredients down for over an hour by hand.

It was unfortunate that as the talk progressed, the presentation became increasingly beset by technical issues; the concluding section was unable to be projected. However, the occasion also corresponded with an upstairs exhibition of some of the speaker’s incredible work. Given the background we were given, it was interesting to tour this, and to see how the processes described (as in the ‘Flower of Creation’) translated in practice to the finished design.