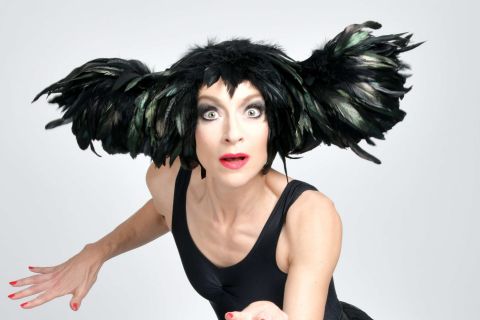 With a voice like hers, Sarah-Louise Young could perform a straight up Kate Bush tribute act, but what she’s done here is much more fun.

Not really tribute act of Kate Bush, but truly a tribute act to her fans, An Evening Without Kate Bush is an inventive way to craft an homage not only to the witchy soprano herself, but also to her fans, the “Fish People”.

Fan, mega fan or merely somewhat-familiar with Kate Bush? This show is absolutely for all of you. You may expect to hear the awe-inspiring voice of Sarah-Louise Young, with pipes impressively suited to Kate’s repertoire, but you might not expect the hilarity of the comedy and silliness she weaves throughout the show. Oozing with playfulness and fantasy, Young captures the mythic essence of Kate Bush in song and performance, but makes this show about us, the fans. There’s touching (and extremely fun) audience interaction; this hour is a joyful community experience (and opens with an apt, killer Stranger Things joke, as Young probably wrote this show, or much of it, before the Netflix phenomenon made Bush a major comeback with Running Up That Hill).

Packing in all the favourites from Cloud Busting to Wuthering Heights to Hounds of Love and more, along with ample surprises and poignant moments, An Evening Without Kate Bush celebrates the positive community that grows in the intersection of fandom and electrifying music.

For more of Sarah’s incredible voice this Fringe, check out The Silent Treatment at Summerhall.