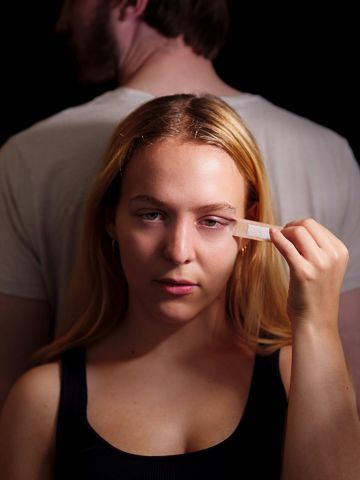 “A dynamic piece of new writing, an intimate window into the mind of a young woman, Tessa, as she tries to understand what is true and what was real. Plasters explores this through two people talking, not having the same conversation.”

The stage is set with a table, where a 20s something girl sits writing in a sketch pad, kitchen unit with cafetiere, cups, telephone, and further over, an unmade double bed.  A young man is unpacking books (Dan Brown, Jo Nesbo et al.) from a cardboard box – as if they have just moved into this apartment. Referring to each other as Chris and Andrea, they begin a rather intense discussion on the meaning of love. “Love can’t be real,” she says, “ no two people experience it the same way” and they debate the statistics and its metaphysical meaning.

While Andrea is rather fragile and withdrawn, Chris has a supercilious, arrogant manner, which she tries to ignore and smiles sweetly as if she is amused.  “Everything happens for a reason – true or false?, “ he asks, almost taunting her to get annoyed and start an argument.

Suddenly, a man in the front row stands up and says goodbye, see you in the morning. It takes a while to work out that this is the theatre director and Chris and Andrea are actors in a play. Taking off these masks and back to real life as Tess and Sebastian, their characters and personalities are no different whatsoever, on stage or off.

He accuses her of tuning out of a conversation after three sentences, while she says he doesn’t try to understand her – that her friends Belle and Olivia don’t like him. They are a seriously dysfunctional, disconnected couple: “You are always so annoying” she says, “Why are you being mean?” – “I am being honest,” Sebastian replies, “Do you care about me?”

With no action, it’s like a radio play, or an experimental BBC 3 drama, which you might very well switch off, as their tedious, tiresome, innocuous questioning of each other continues. Unlike the powerfully poetic plays by Albee, O’Neill and Pinter, the barrier of communication between this bickering couple does not engage the audience.  The unexpected concept of this being a Play within a Play merely confuses the entire scenario.

The title and illustrative image of ‘Plasters’ evoke the healing process of a wound, but Tessa's feelings of anxiety or nervous breadown are left unexplored. It’s all about questions with no answers, lacking any sense of dramatic, character or emotional insight.