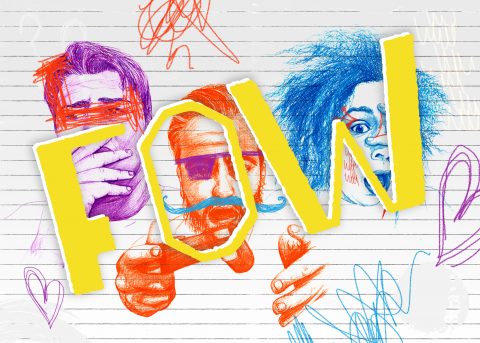 Fow is the story of three interconnected people in this gentle story about communication and the difficulties that happen when we struggle to communicate with each other. The production is filmed in BSL, English and Welsh, with the option of closed captions if in need of translations to understand everything going on. Each actor uses their own language – one of the actors is deaf, one speaks mainly Welsh and the other English – with an additional BSL interpreter on screen often.

This production makes the most it can of the online genre. There is a good split screen element to show the different journeys each of the characters is making and its use of illustration and drawings on sticks to indicate places and people is fun. The stylised illustrations give the production a quirky feel making it less of an online theatre experience and more of part-cartoon production.

What makes the show less effective is the length of it – at 1hr 45minutes, which includes a 5-minute intermission, it is a marathon production for an online viewing and the pace is at times struggling to keep the energy going. It is difficult to get an in-depth connection to the characters, although whether this is partly due to the various languages and trying to keep track of the information, or the necessary physical separation between them it is difficult to say. Despite this, it is a strength of the production to use the different languages and make this simply part of the story, rather than a forced element. With trimming to hone in on the nub of the story this could really help change the tempo and bring out the underlying dynamics running through the piece.

Show: this has ended its run for now.