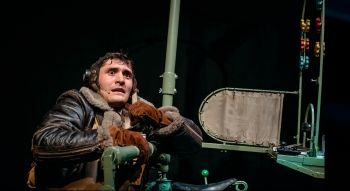 Here we go again.  I could do without this, especially as I haven’t slept a wink.  Everything’s changed, everything’s different.

John prepares for a final wartime mission as wireless operator with the crew of Lancaster bomber G for George. They go through their customs to invoke Lady Luck while performing an intercom check and roll call.

Her blessings must surely be wearing thin as this is their thirty-fifth trip and John wasn’t expecting to survive past ten. There are better odds playing Russian roulette. If he knew what he knows now he wouldn’t have volunteered, and perhaps he would still be a carpenter back home.

He has left pregnant fiancé Kate there, and his mind turns to a future with her as he sees a V2 rocket streak towards England. V for vengeance against the allied bombing raids.

Fate seems unkind as the crew fly directly into enemy fire. Lost, damaged and growing despondent, they weigh up the unrealistic option of turning back. They have to hold it together and execute a plan devised by “clever men” which will see 1000 Lancasters rain fire on the civilian population.

How close can one get to death and still be alive?

This is a hugely atmospheric, ingeniously staged play with sky high production values. Central to it is the excellent performance of Thomas Dennis as the eponymous wireless operator surrounded by the radio chat of the disembodied crew. He portrays him as both emotionally and physically punished within the twisting, plunging aircraft, and ultimately as questioning. He occasionally loses the battle with being heard over the otherwise excellent sound design and while the tension builds the scope feels slightly constricted by the mission.

As a character in Kurt Vonnegut’s Slaughterhouse 5 says, “It had to be done … Pity the men who had to do it”.