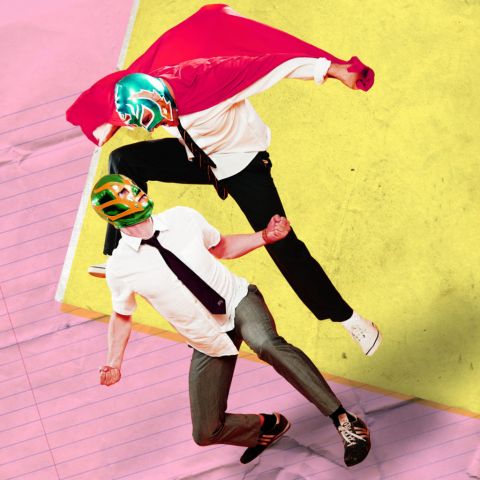 If you want to find the Scottish talent at this year’s Fringe, look no further. Square Go is a true reflection of our school yard antics, full to the brim with hilarious Scottish phrases, strawberry laces and what it really means to be a man. We find Max, hiding in the school toilets, preparing himself for his first proper toe-to-toe square go fight with the terrifying school bully, ‘a pure beast.’ Friend Stevie is there to console him, but, like typical young Scots, their relationship is based solely on slagging each other off within an inch of their lives.

We descend into Max’s daydream fantasy of being a real macho man, just like his hero Randy Savage. His lack of a male role model at home has lead Max to believe its physical prowess that makes a man. The lighting and sound turned the small venue into a wrestling arena that holds a thumb war, arm wrestling competitions and a tense drinking game. Complete with dramatic flair, slow-mo and audience participation, the crowd often erupts into laughter and cheers. Portman and Wright aren’t afraid to get right in the audience’s face, and they sure can whip up the crowd.

Wright, is truly impressive, managing to embody many characters fluidly; including a stuffy old teacher and even the horrifying bully himself. With the help of a menacing Lucha Libre mask and a deep graveling voice he creates a threatening atmosphere that lives up to the hype. There are also tender moments of shame and confusion between the pair. At times poignant,  they open up to us about bullying, homophobia and the embarrassment of calling your teacher ‘da.’ Mixed in among the slang and humour are real issues of masculinity.

Square Go captures a part of Scottish culture rarely seen on stage, and it does so with immense talent and flair.