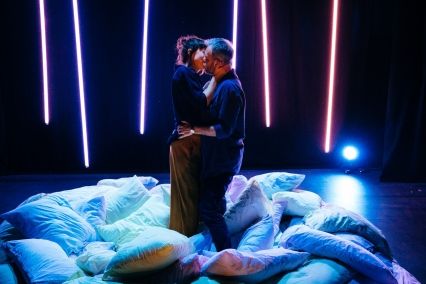 “Mr and Mrs White” are feathering a love nest with a huge pile of cushions.

Not that the L-Word can be mentioned, it’s one of the formal rules, or 10 commandments, until they come up with an eleventh.

These are no newly-weds, particularly not to each other, as this is an extra-marital monogamy. Feeling themselves boring, white thirty-somethings, they think they might have found something special together.  Nadia is an alpha character who rails against the notion that things are made to be small and feels trapped; she wants more.

The illicit flutter awakens the butterflies in the stomach and opens possibilities.  A bottle of wine at lunch; dancing on the table, and she wants to have her kink and eat it, as they talk about exploring a few fetishes and perhaps a three-some. But the truth is that they are already shared with spouses and children at home.

With the passing of time, they want more than their carefully constructed stolen Mondays can provide, and the rules deteriorate and get bent. Have they constructed a tiny fantasy world while the real one remains outside, and what would happen if they just stopped telling lies?

There is a share of dynamism and tension as they struggle both to escape and to compartmentalise their lives and work out what really matters. While they battle against the humdrum the plot elements are, however, somewhat routine.  Sharply written and well performed, it still feels a little thin - as with the characters it seems to run out of things to say. The paramours themselves remain more excitingly watchable than loveable.

As an examination of marriage, trust and ostensibly no-strings affairs in the pursuit of happiness, it is an interesting bit of pillow talk.

Note: The production transfers to the HighTide Festival in Aldeburgh 10 to 15 September 2019.