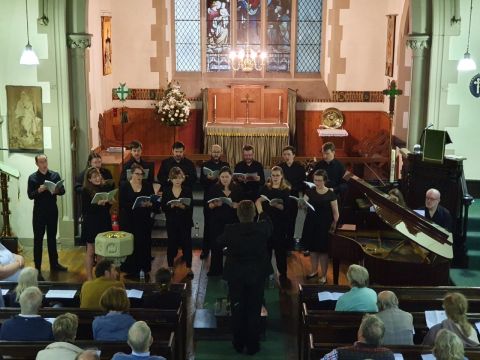 The old saying that Rossini’s Petitie Messe is neither small nor solemn isn’t quite true.

As the conductor helpfully explained in an engaging and informative introduction, Rossini approached issues of length and scale in this particular work from a somewhat comical perspective. And of course, ‘solemn’ means something different liturgically than it does musically.

Nonetheless, the penitential Kyries began with an admittedly jaunty beginning, immediately catching the audience off-guard. The ‘Domine Deus’ in the Gloria was also disarming in its jollity, but this was a really brilliant performance by the solo tenor, whose voice filled the entire Chapel. The solo soprano similarly engrossed us during the ‘Crucifxus’, in a section more reminiscent of an aria or love song.

Other components of the Mass were indeed more traditional in style, but which Rossini made his own. The frequently recurring word “Credo” in the section of the same heading was a device oft used before, here its confident recurrence buttressing the freer elements interwoven in between.

Rossini had originally scored the work for two pianos and harmonium, but the translation to piano alone generally worked well, with the possible exception of the Prelude Religieux, which sounded rather thin; after all, Rossini had written this somewhat lengthy section precisely to showcase the harmonium.