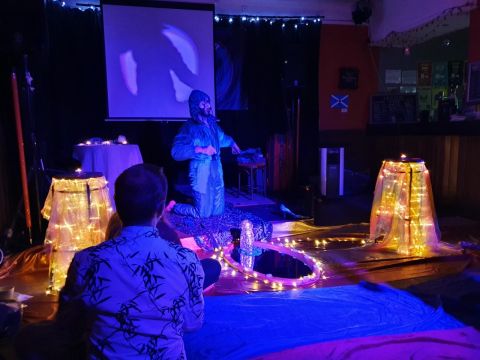 A show which, by its own definition, resists classification into any one category!

theMany – a “genderqueer blue collection of creatures in one body” – gently explores the kaleidoscope of emotions associated with the meaning of identity through the medium of song, and gentle interactive narration. With a distinctive bass Belgian voice, and a rich sonorous tone, theMany sings all of the songs acapella, and without text.

Considerable care and sensitivity clearly went into making the room in the venue feel a safe place and almost sacred space, where members of the audience were encouraged to be as involved and connected as felt right for them at the time; to this extent, it was co-created. At the entrance, we were welcomed by “the Queen of the In-Between”, who invited us to have lavender oil rubbed on our wrists, and to take off our shoes if we wished. The room was bedecked with fairy lights, and looked rather like a grotto – indeed, “the faerie garden”.

That the experience was unashamedly sensory was reinforced by the the amazing array of flamboyant costumes that correspond to each incarnation of theMany’s souls, co-exisiting in a singular shell; the equivalence of ‘our’ for ‘I’ was quickly understood. The overall ambience may not have universal appeal, and the themes of the songs will be understood by some, but not by all – “The Gender Line” explores issues of fluidity and contingency where a binary distinction is often presupposed. That said, the show is challenging without being threatening, and affirms integrity in diversity, and liberation in inclusivity.

Although, on the face of it, this might appear to be a performance for a niche audience only, it probably has something for anyone who is seeking, not certainty of the destination, but affirmation along the journey. The performance finished at 10.05pm.