How To Be Brave, [email protected], Review 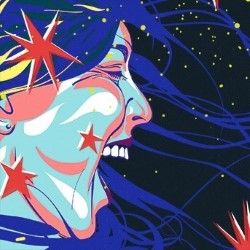 Today of all days, Katie must find the strength to be brave. But when her mother burns the toast she is making for Little One’s breakfast, the thick smoke triggers a flight response in Katie, which sends her hurtling out into the streets of the town she he has known all her life. The familiar landmarks of Newport conjure up memories of the times she had felt brave before, and of the time she completely froze with abject fear. Ghosts from the past are raised and exorcised.

How To Be Brave manages to be both very funny and deeply moving. With enormous energy, Laura Dalgleish spins around the circular stage with a performance that is as much physical theatre as storytelling; the tale proceeds at a frantic, galloping pace as Katie throws herself down a mudslide, dances wildly on a traffic island, and careers around the town on a stolen child’s bike, chased by a police car.

The story has a very authentic ring to it, which springs in no small part from the way it feels so rooted in a particular place – shabby old Newport with its castle just a ruin, battered by bombs in the war, so many of its buildings now empty and derelict. And yet…

When Katie comes full circle and is finally re-united with Little One, she has found the bravery she can now give to the child waiting in the hospital bed in her superhero cape and wings.