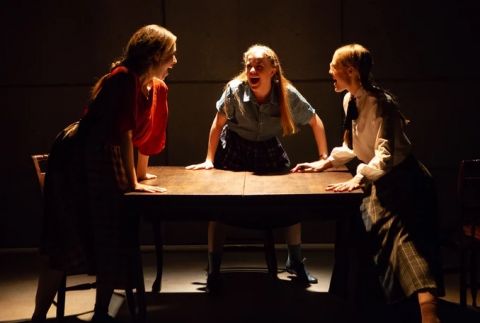 There won’t be much chance or need for makeup tonight, secluded as they are awaiting an evening meal - which for any of them could be their last.

These are Hitler’s tasters, a select group of women charged with ensuring that the Fuhrer’s food is not poisoned as, fearing plots, security at the Wolf’s Lair is tightened.

It’s a role they feel honoured to be carrying out, privileged to be eating off the Fuhrer’s fine bone china.  But as the door thumps open and they are caught in harsh light they bow to mannered eating, joyless, mechanical and fearful. And wait for an hour to see if they will die.

Time passes slowly.  A bell rings for different purposes and what if it is isn’t actually an hour?  But if they can’t trust the Fuhrer, who can they trust?  They look forward to the day that he makes Germany great again and rules the world.

In the meantime, they wait, killing time by playing truth or dare and fantasising about Hitler and movie stars. They should stick together, not knowing how many of their friends are even still alive, but it’s not easy when enemies seem everywhere.  They may be kept in the dark but they are not completely naïve, they know about the outside world, they know they are replaced, but are unable to see further than the propaganda. Looking on the bright side they will be safe and healthy, in better shape to bear sons for the Motherland; or is it Fatherland?

A rumoured visit by Hitler leaves them giddy with excitement, but there is many a slip ‘twixt cup and lip.

It’s a production that feels like it shouldn’t work, that these anachronistic hysterical girls should jar and that the subject is no joking matter.   All credit then that the tightly performed and directed work lifts them from being leftovers from the past and that the humour cuts like barbed wire. The staging and the space perhaps don’t entirely do them justice.

A bold telling which brings something new to the table.