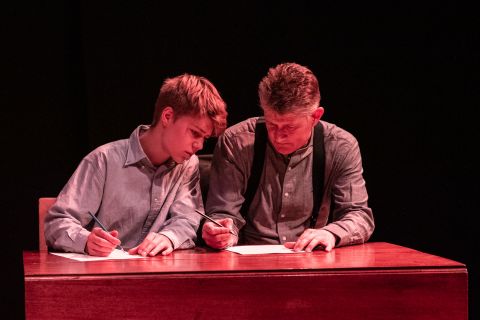 A delightful production of this well-known book and TV film, the Aquila Youth Theatre ensemble sensitively portray this tale of a young evacuee and his initially reluctant caretaker, during WWII. Jo Brayton’s thoughtful and clear direction allows the story to shine through.

With the use of a simple set and a large and lively cast, this story unfolds at a gentle pace allowing a slow build-up to what is the evolution of an unexpected family, from two very different but equally sad backgrounds. Punctuated by excellent puppetry from Baxter Westby via Sammy the Dog, the audience is easily won over to the world of Little Wierwold and its village of characters. Matthew Edwards (as the sole older actor) is a quiet, tentative Mister Tom, which works well with the pace of the piece, nicely balanced with the fragility portrayed by Freddie Coughlin as William Beech and the irrepressibility of Josh Hogan’s Zach.

There is some wonderful use of silence at key moments, letting the audience in to the palpable emotion on stage. The poignancy of the song Wish Me Luck (As You Wave Me Goodbye) is also used well in developing pathos: the dichotomy between the cheerfulness of the lyrics and the underlying loss that these lyrics are connected to is well placed in ensuring the audience follows the journey of the story.

The actors are well cast, with the leads embracing these familiar roles and bringing their own take to their portrayals. The supporting cast do well in this and to their many roles. While there may be moments where projection of voices could be better, the ensemble works very well together in this charming family show.