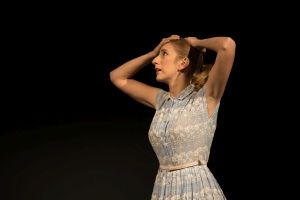 In the spring of 1946 Eleanor, a 16-year-old American trapped in Germany, is about to face the darkest year of her life.

Radio voice-overs announce the German surrender, VE Day, the liberation of the Bergen-Belsen concentration camp and the start of war trials.

The story picks up from An American Girl in Hitler’s Germany, and she recaps how the family left for Germany in the hope of a better future, only to be trapped there as the War closes in.

Once again, her Mother’s German citizenship complicates matters as the return visas do not cover her costs. Eleanor will need to leave with her father and siblings while they save for her passage. Eleanor is ready to go but the child within her clings to her mother.

They return by the ship, surrounded by the many languages of other survivors, seeing again the Statue of Liberty; the expected two-year absence has stretched to seven.

The contrasts to the ruined city that she has left are immediate, from the clothes to the availability of food. School is challenging, everything new, she feels like she is starting from scratch. But the biggest trial are the memories, the traumatic experiences invading even this safe space. She is haunted by air raids, the threats of rape and violence from the vengeful Russian soldiers. The guilt she felt at leaving German friends extends to the death camps under their noses and America’s use of the atomic bomb.

Only through creative writing will she hope to give a voice to the child still buried in Berlin.

This is well performed and in a very similar style to the previous work.  While the material might be less dramatic, the clever use of flash-backs and well-paced delivery adds impetus.

A worthy companion piece, which offers closure to a heartfelt story.