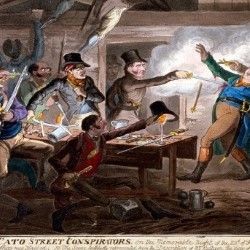 On May 1st 1820, a vast crowd gathered outside Newgate prison to witness the hanging and beheading of five traitors, caught in the act of conspiring to assassinate the entire British cabinet and declare a republic.

David Benson - Cato Street 1820 tells the story of the plot, the trial and the executions against the background of tumultuous revolutionary times. It is an engaging, well-researched tale of conspiracy and betrayal, and the performer takes particular pleasure in sharing his settings of the rousing revolutionary songs of the time.

Although dressed in a nineteenth century costume, the storyteller reaches out to a modern audience with the occasional pointed question, and delights in finding parallels with austerity Britain. The performance style calls to mind the dramatic public readings of Charles Dickens, who toured the country with adaptations of his novels; the setting is simple - just a backcloth and a lectern with reference notes. The tale rattles along with tremendous gusto and enormous energy. There are shocking moments of horror and high drama, grisly details of gruesome violence as well as poignant family scenes. The main characters of the drama – the five key conspirators – put in an appearance at various points, but the characterisation is done with only the lightest of touches, relying too heavily on minor differences in physiognomy which are hard to make out. Dickens would perhaps have given more colour to the characters so that they emerged more clearly as individuals.

David Benson: Cato Street is one of those highly entertaining one-man shows that are never going to win awards or garner much in the way of critical acclaim, but will which will still delight many audiences.