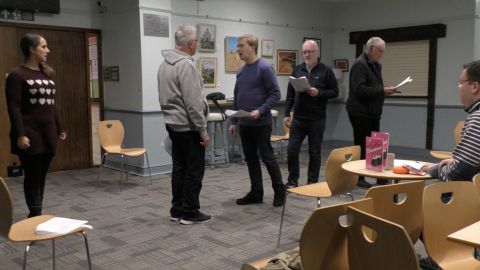 As the cast enter the space, they perform basic movement sequences and speak abstract sentences as they are ‘reflections’ of one another. Frank stands, and suddenly the dramatic style is dropped; a relief fills the room. Being Frank is a brutally personal journey into modern masculinity. Holden reveals how he struggled to put this idea to paper, that his mental health talked down every option. He manages an incredibly difficult display of honesty without crossing over into self-obsession, showing his pain without asking for sympathy or respect. His story is like many others' stories, and he is simply trying to talk about it. He faces the ensemble who physicalise the thoughts in his head; his depression and anxiety is laid bare for us all to see.

Instead of battling with these thoughts, he chooses to mould them into characters, directing this piece as it goes. These scenes focus on his relationship with his son, Alex. The circumstances are all too familiar: domestics in IKEA, condescending doctor appointments, and a father and son who just cannot seem to talk to each other. These moments are left bare; we sit in tense silence with them, willing them to open up. Portlock exacerbates, "Men are bloody useless." Comedy is woven carefully throughout, allowing for a lightness to the heavy subject matter.

The ensemble cast were sublime, they carried the piece off beautifully and all remained connected in solidarity. The movement is slick and the use of multiple props whilst keeping the set bare is impressive. The original music is heartfelt and bittersweet. Munson in particular gives a deep, soulful rendition, enough to bring tears to your eyes.

This piece is unique in the way it conveys a heart-breaking theme, with no need for the dramatics. It will urge anyone to call their friend, father, brother or son. There’s a need to change the pattern and pass down a different way for young men to deal with their emotions, and Being Frank is a huge step towards this goal.