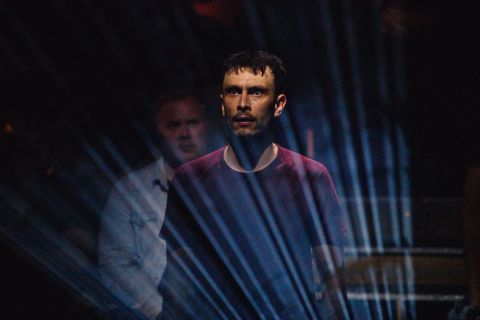 Award winner Richard Gadd performs a tense and deeply personal view into his complicated relationship with an unbalanced stalker. Martha is a middle-aged woman who met Gadd when he was working as a bartender. By offering her a free tea, he lights the powder keg, a chain reaction leading to more mistakes, broken relationships, losing his home and even physical violence. The story unfolds like a thriller, every turn leading us to a darker development.

This is not an easy watch. The audience is dragged down into Gadd’s pit of despair. They can feel his anxiety, fear and impending dread. Hard-hitting topics such as mental illness, male sexuality and rape weave through the story’s tapestry. Dripping with sweat Gadd bares his soul throughout his performance, managing to make us laugh one minute then make us deeply uncomfortable the next. It’s a well written and calculated script but performed expertly like a genuine unravelling, as if it’s coming to his head in the moment.

Simple additions of projections and voice-overs hit hard the reality of the situation. Words encircle around the crowd’s heads. The hatred, the embarrassingly personal and even the loving emails and texts are laid bare. The law picks him apart in front of us and offers little help. Gadd goes the extra mile by including interviews with his landlady, ex-girlfriend, even his parents. Most effective is the use of an empty bar stool. It spins in the centre of the room as if watching Gadd’s every move; he directs his anger and sympathy back towards it as if Martha is sitting aloft, as if she is in the room with us. Her fake Irish lilt is harsh and threatening over the sound system. She remains mostly an enigma, and it’s the mystery that makes her all the more unpredictable and sinister.

Gadd turns himself inside out and asks us to take a look. It’s gory and not for the faint-hearted, but shines an unapologetic light onto the modern male psyche and the blurred lines between love and hate.