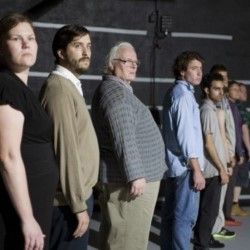 Tickets for this show may be hard to come by. It may already be a sell-out for the whole run. This is because there are only eight audience seats at each performance. On the other hand, there are four performances a day.

With the eight seats filled, eight other people troop in and take their positions in an open formation, facing the audience. They look like a random bunch of ordinary people; they look like they might have just been brought in off the streets. They look at us, we look at them. Perhaps as much as five minutes later, they have not moved. Just as we are starting to think that this might be it – this being the Fringe – they start a sequence of synchronised movements, turning, weaving, scampering.

When the movement stops, they each pick up a chair, and sit facing an audience member at a distance of less than a metre. This is unsettling. Then each speaks in turn. What they say may be true, false or partially true. This starts to feel like a self-help group. When will my turn come? (“My name is Jon and I am theatre critic. It is three days, seven hours and twelve minutes since my last review.”) Fortunately, the moment passes, but how many others shivered at the thought of an invitation to share?

8:8 is an intriguing event which will have some audiences squirming, but the intention is plain – to look at how we quickly judge people by their appearance, and whether that judgement changes when we listen to what they have to say. Interesting, but not profound.