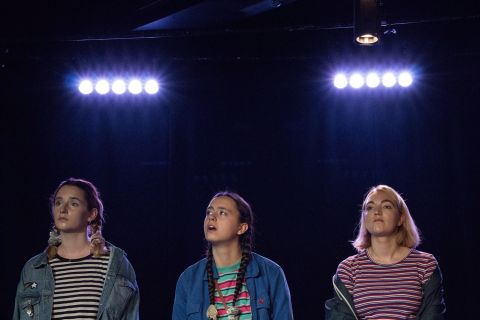 Set not long before midnight of December 31, 1999, 00 looks at the fear that takes hold of people at both an individual and national level. Four characters meet, all with their own interpretation of the impact of Y2K. The fears that existed at the time, focussed on the Y2K bug and its potential to cause whole computer systems to crash, were both widespread and also misunderstood. This is magnified by a section that discusses other world disasters since then and the impact that these had in the immediate and longer-term.

There are some very funny moments in this show, particularly where references are made to pop stars and collectable toys of the time period, setting the mood of the time well. Chuckles indicate audience members to whom 1999 may not feel like a distant memory.

Scenes depict the lives that the characters follow after the events of December 31, 1999, up to the 20-year anniversary. These seem scattered, however, and are not necessarily easy to track; they often seem off-kilter, although whether that is deliberate or an accident of workshopping is unclear. What this says about the fears of humanity, prompted by the more immediate awareness of disasters in present day, is also not clear.

This show is likely to provoke debate, but it does not feel as if it all connects. There are some great moments – such as the prize that is won which will make you dance in your seat – but these are interspersed with scenes that slow the action, which end up being an inhibitor rather than space for the story to grow. What does work is the sense of time that is portrayed in 00, a reminder that sometimes worry is for nothing; not only that but time passes quickly and we may not always recognise what we achieve with that passing.