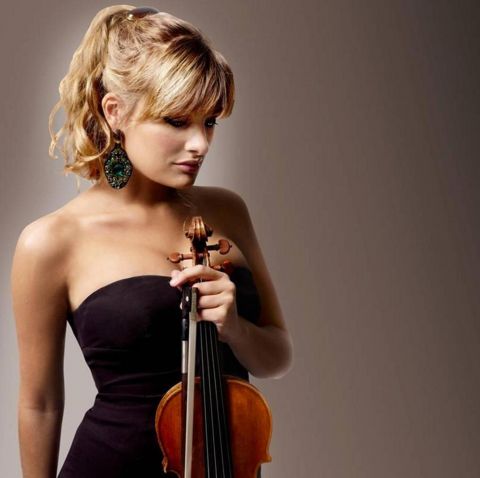 Every morning during the Edinburgh International three week festival, chamber concerts are held in the Queens Hall. Today heralded the first concert. Consisting of a baroque programme it featured the acclaimed Scottish violinist Nicola Benedetti and the Academy of Ancient Music. Richard Egarr, the accomplished harpsichord player and authority on Baroque music, has been Music Director of the Academy of Ancient Music since 2008. The ensemble, who played standing throughout the concert, play on baroque instruments thereby creating an authentic tone for the period.

The concert began with Vivaldi’s Concerto in D major for Violin, Strings and Continuo - ‘Grosso mogul’ with Egarr conducting throughout from the harpsichord. Vivaldi was a distinctive composer, his compositions are readily recognised but they do require virtuosity on behalf of the soloists and we witnessed Nicola Benedetti’s immense talent as an exceptional violinist, particularly in the cadenzas which require technical brilliance from the soloist as they span almost the whole range of a violin. It was a joy to hear her perform this concerto.

Vivaldi was also the next composer on the programme, this time it was his Concerto in A major for Harpsichord and strings. Egarr is a master at playing the harpsichord, which is a particularly difficult keyboard instrument to play as it is completely unforgiving if you make a wrong note, as they have no sustaining pedal. Egarr of course did not make any mistakes and played with a terrific flourish, complemented by the talented musicians in the ensemble.

The programme then moved on to another Baroque composer – Telemann – his Concerto in A major for Violin, Strings and Continuo entitled ‘The Frogs’. Before starting, Egarr told the audience that Telemann was a ‘master of technical colour’ and this piece was a perfect example of that. Nicola Benedetti was again the soloist in this frequently restful composition. She has such an ability to elicit the most beautiful, soulful sound on her instrument which is called the Gariel and was made in 1717 by Stradivarius. In an interview she said: “I’ve been given a great gift in my life ….when I’m playing the violin, it’s part of me, we are one thing.” And you feel it is an honour to hear her perform and there was a perfect balance with the musicians.

I have never heard Benedetti in a chamber ensemble and it was delightful to see her join with three violinists from the ensemble to perform Telemann’s Concerto in C major for Four unaccompanied Violins. The slow introduction in the first movement was exquisitely played and as a quartet of violinists they blended beautifully.

Horns were introduced in the next composition – Telemann’s Ouverture-Suite in F major for Two oboes, Bassoon, Four horns, Strings [without violas] and continuo called ‘Alster Ouverture’. Telemann was fond of the style of the French dance suite, often called the Ouverture. In ten movements, it was performed in 1725 in honour of the visiting Duke August Wilhelm. Baroque horns are often valveless and so particularly difficult to play and hit the right notes, but all four horn players did an exemplary job of performing in this composition which frequently featured horns echoing the strings.

The last composition on the programme was Vivaldi’s Concerto in D major for Violin, Two oboes, Bassoon, Two Horns, Strings and Continuo. With Benedetti again the solo violinist, it again displayed the musical talents of this unique baroque ensemble. The concert was recorded by the BBC and will be broadcast on Radio 3 at 11am on Tuesday the 7th of August.