Who Do You Think You Are? Barbara Brownskirt., Assembly Rooms, Review 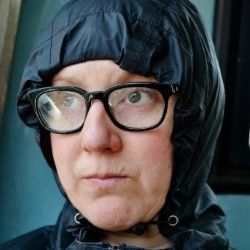 Clad in a navy anorak, Penge’s lesbian poet has nipped up to Edinburgh to try her material out on a slightly larger audience than available the 197 bus stop. Receiving high praise in previous years, it was odd to see such a sparse auditorium there to greet oddity that was Barbara Brownskirt.

Bringing along her ‘epic poem’, which isn’t really delved into until the end - where Barbara is cut off before she can really make a dent in it, Barbara reads some poems for her audience - which are presumably terrible to create an ironic humour.

Sadly this falls short and just appears as poor quality. Despite a few titters, there isn’t an awful lot to guffaw at throughout the show, with talk of her feminist ways and her adoration for Judi Dench. It is clear that McLeod is aiming for an extremist character, whose serious nature will have an opposite, comedic effect, yet it doesn’t quite hit the funny bone.

Karen McLeod’s commitment to the part is commendable - with her refusing a bow in place of a staged grumpy storm out, and is a welcome presence in the room. It is just a shame that the comedy does not quite land in the way intended.