The Woman and the Canvas, theSpace Triplex, Review 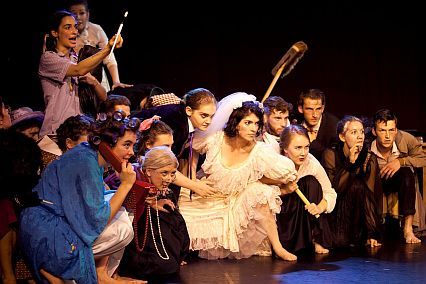 “How about we try again today?” Anna’s doctor cajoles as she stands before an artist’s easel. There is therapy in returning her to her art, but also the terror of the blank canvas.

Anna is somewhat of an enigma, but as an enormous parade of characters take to the stage we get some insight into the events that brought her to this point. They form a living tableau of the past, the memories mixed and overlapping, sometimes repeating in everything from slow ballet to rushing, whirling childhood games. And here amongst the throng is the younger Anna, taken from her ailing, poor father and packed off to boarding school by her uncle, who seems to have more time for his horse.

As she captures the scenes she conducts the action with her paintbrush like a baton, adjusting poses and painting in changes, orchestrating a better composition of her past. The life of an artist is not however an easy one requiring her to put herself on show, to be judged. Anna’s figurative work is ridiculed and dismissed as trivial by the critics; “a female artist!”, they scoff.

There are traumas too with her thuggish infantilised cousin and the apparent loss of a beau, the swooningly handsome Theodore. Her grip on reality seems as fluid as her paint as she tries to exhibit her feelings and gain control.

In this large-scale ensemble piece of physical theatre, the movement and attention to detail is superb, at times flowing and at others staccato – thousands of precise cameos accompanied by a specially composed orchestrated soundtrack. There is never a point where the astoundingly energetic cast members are not actively playing some part in huge panoramic, painterly lit scenes.

The plot itself is open to interpretation, the layered narrative somewhat abstract, presenting a procession of grotesques in surreal dreamlike vision.

In terms of highly visual physical theatre it is a masterpiece.