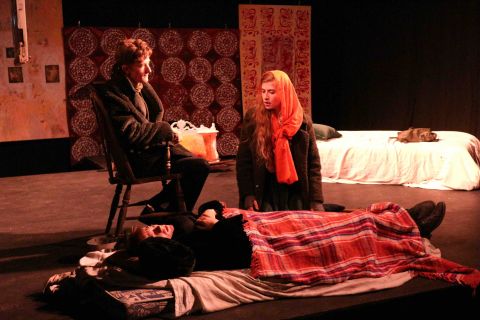 The Promise opens in 1942 Russia, where three teenagers band together to survive the World War 2 siege in Leningrad. The audience follows these three for over more than a decade, exploring the emotional bonds formed between the characters, and engaging with the timeless themes of love, friendship, loyalty, and survival.

The actors tackle the blunt script with their own skillful depictions, adding emotion and gravity to curt conversations. Since the play is set wholly in the same flat the actors become key to the play’s development.

Lika, the female lead, is played with captivating dramatics, her development piercing as she grows from a 15-year-old with a childish outlook to a heartbroken married woman who has to face personal realities and the “Winter of 1942”. Her character is the play's saving grace, the actress turning pauses into poignancy and tears into power. The two male leads are also executed with humour, boyish charm, and technique. It is compelling that the exploration of “being a real man” is done with modern vision and passionate theatrics. The lighting and sound effects are as equally impressive, informing the audience of the action occurring outside of the one-room stage.

The play doesn’t quite find enough time in its hour-long performance to explore the complexities between the three characters, and so some of the emotional weight is sacrificed and replaced with rushed scenes, leaving the character relationships and love triangle somewhat undeveloped. The actors are excellent performers who grapple with the storyline's sophisticated themes, but their talents are slightly misplaced in the enormous time jumps and abrupt, short scenes.

Ultimately, the performers navigate a complicated script with sincerity, exploring the disillusionment of youth with a dynamic and heartfelt approach.