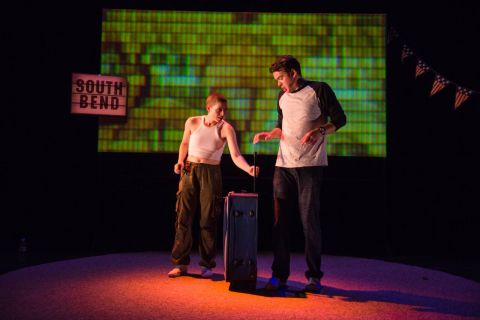 Martin McCormick has a problem with his teeth – he lies through them. “Trust me”, he asks the audience, all he is about to say is true.

He is going to tell us about love affairs, his first being with America. Aged 11½ he dreamt of being like the stars from the raft of 90’s TV shows that landed on our shores. He imagines himself chilling with the Fresh Prince, being Saved By the Bell and bewitched by Blossom. By 1999 he has recorded every episode of Seinfeld.

America speaks to him, perhaps in an impenetrable way due to their pronunciation of English, and he is baffled by their choice of leaders, but still their ability to whoop and fist bump speaks volumes.

It takes him until 2006 to go to the land of his dreams and it’s everything he ever imagined. Fast, aggressive and freewheeling (his college has a clothes optional policy). And it seems that, just like in the movies, being Scottish in California is attractive. What’s the catch? A nagging cynical doubt is brought from home (here voiced by the on-stage foley artist).

It’s also love at first sight when he meets a local girl, part Norwegian/Irish/Cherokee. As the end of his visit nears, out of the whirlwind, she promises that she is going to come to visit him. “Who wrote this pish?” asks the voice from the foley booth.

When the call doesn’t come he fears that she has met somebody else and so heads for South Bend, Indiana and finds things have changed. The reception is less than warm and Charlotte, whom he assumes to be her mother, is well … scary. He has soon outstayed his minimal welcome, finding himself falling out of love and caught in his own American melodrama.

The production is a good humorous “road movie” yarn which says something of borders, of give and take, immigration and cultural identity. There are strong performances (a few fluffs aside), with Chanliau given the most opportunity with multiple parts. The set works well with a “workshop” booth for the live sound effects covered in typical Americana ephemera and a giant screen that flexibly provides backdrops in 90’s style 8-bit graphics.

Unfortunately, the script merely hints at cultural issues and is happy to deal in obvious national stereotypes. Charlotte takes an anti-colonial stab at “what you did in India, Africa, Ireland” which McCormick counters with not being English. This is presumably satire and not revisionism of how the Glasgow Tobacco Lords made their money.

It’s slick and entertaining, only slightly flawed by hiding in a shortbread tin.