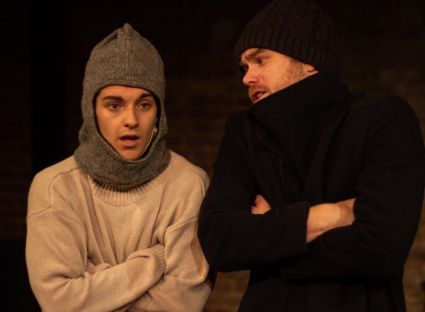 The chilling words of an advertisement, allegedly published in The Times by Shackleton to recruit men for his Endurance expedition the Antarctic. While a copy has never been found, what is known to be factual is that an 18 year old boy, Perce Blackborow was an unexpected member of the crew.

With the clang of a ship’s bell, the bearded Ernest Shackleton stands on stage, polo neck sweater, cavalry twill trousers, heavy boots, staring as if looking out to sea, contemplating what he and his brave men are about to experience across the most treacherous ocean to an inhospitable, desolate place: Why do I do this? he ponders .. because it is irresistible, it is only in the Antarctic, where he feels alive.

Now, in 1914 there just remains one great main object of Antarctic exploration – to cross the white continent from sea to sea.

With the sound effects of unfurling sails, suddenly a young man stumbles across the deck to land at Shackleton’s feet, “Who be You?” in astonishment. Hearing that the young Welsh boy, with no sailing experience just the lure of adventure has sneaked on board the ship when docked in Buenos Aires, he is furious, fuming with rage, accusing him of threatening the expedition. He is an idiot. Rations per man are limited so perhaps he should throw him overboard or their first meal if they turn cannibal.!

Thus it’s the start of the strange relationship between Idiot and Shackleton, referred to as Boss. The regular bells of the Watch indicates passing of time and a map on screen shows the route from Buenos Aires to South Georgia. Through monologues like a ship’s log, and wise and witty conversations between a naïve young boy and one of the most heroic travellers of all time, we hear about their extraordinary, hazardous journey to explore the South Pole where “sea is dark as death.”

Carl Thompson portrays Ernest Shackleton with an earnest demeanor, a proud, passionate man whose courage and leadership is essential to the success of the expedition. Wide-eyed in wonder, hero worshipping his Boss, Idiot the Stowaway is brilliantly played by Craig Michael Howlett with charming, boyish innocence and sing-song Welsh accent. The performances are directed at a gentle pace, whereby the musical soundtrack adds a real action-movie depth to the drama; excellent sound effects capture the howling wind, rolling sea, creaking timbers, while we follow the map through the land of ice, the route marked in red like dripping blood.

This is beautifully written new play by Andy Dickenson, richly poetic (with hints of Dylan Thomas, W.H Auden and Alfred Lord Tennyson) in its lyrical language, balancing light humour with thrilling narrative. This is the art of real storytelling and while it is a mesmerising to watch on stage, it is also a play for listening - it would make the perfect drama for BBC Radio.