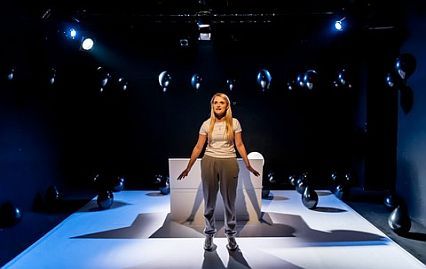 There are other things Angie would rather be doing, but “it’s fine”. Until the day it isn’t.

By 7.30am she is already starting to panic. Acting as a carer for her mum there is a constant list of domestic and personal duties before she can even set off for work. Eager to please she puts herself second and finds it difficult to say no, but today there will be little things that light a fuse.

She is finding herself to be a bit invisible, from the woman who ignores her in the supermarket queue, to her headteacher boss discussing redundancies and asking “what makes you stand out?”. She wants to go to art college, to make something that people will see, but her life seems stalled by her commitments.

Underlying these is the care of her mother and she has the additional pressure of an interview for a bank loan towards funding a care home place. While her hopes seem to go up in smoke on both fronts she is tasked with completing the ill-organised school Guy Fawkes bonfire party.

Left alone to pick up the pieces the Roman candles should really be maroons to warn that she is about to spark events to get her noticed.

This is a well performed monologue with the harassed and increasing despondent “Angie” taking on the voices of a range of characters. Ashworth makes it compelling to watch with a growing sense of tension, which is backed by subtle sound design. The script does a good, if a little rapid, job in depicting her decline. Given its ending however the use of the Gunpowder Plot attack on Westminster, depending on interpretation, feels at best a little contrived and at worst misjudged.

Not exactly a firecracker, but not without a little sparkle.