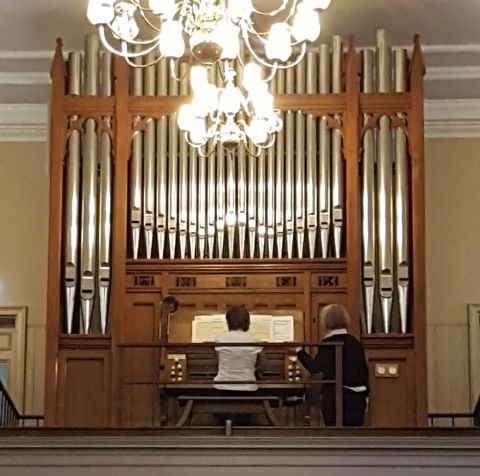 Nancy Crook returned to Stockbridge Parish Church for her annual organ recital as part of the Fringe. There was a slight delay to the commencement of the recital due to an apparent discrepancy over its starting time, but with the programme underway, we heard ten very varied organ works.

The organ at Stockbridge is fairly small and limited, which meant that some of the items played were unable to be heard to their best – this was especially so with the opening piece, Bach’s ‘Fantasia in G minor’, that would have been familiar to many; similarly the ‘Fanfare’ by Jackson sounded quite flat on an organ with no trumpet stop or other reeds; and the ‘Recit de Tierce en Taille’ was played using the (Swell) Echo Gamba and Flute Harmonique – in the absence of a Tierce stop.

The more reflective pieces were much more of a delight to listen to. Particular thought and care had been taken with the registration for ‘The Sweet Rivelet’; similarly, the ‘Choral Fantasia on an Old English Tune’ was moving, in conveying something of the contemplative, and a spirit of quiet and reflective devotion. The first of the two concluding Vierne items was well played, and effused something of a magical and enchanting air; again, however, the limitations of the organ meant that the Carillon was a rather anti-climactic end to the recital. The performance finished at 2.15pm.