Of Rags and Bones, The Quaker Meeting House, Review 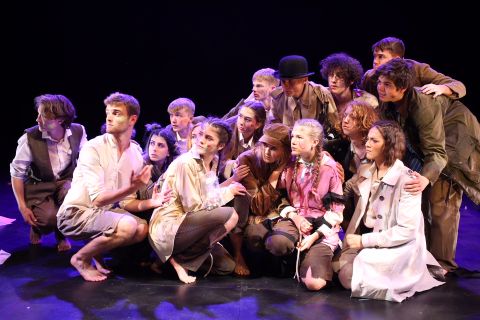 Of Rags and Bones is a poignant and disconcerting show performed and devised by Newbury Youth Theatre. Based off of the collection of short stories Under a Glass Bell by Anais Nin, the play takes a metaphorical and fantastical approach to human emotion, floating across magical realism, heartbreaking stories of loss and love, and finally tying them all together with the thread of compassion. The stories are told by an assemblage of displaced youths to a man dressed in business attire, who at first is condescending and snobbish, but eventually begins to listen.

The scavengers and “collectors” of discarded hopes are cleverly dressed in similar earthy tones, with personal character quirks painted on their faces. The ensemble is large and fills the small stage, creatively using giant boxes with fairy lights as their movable platform. Directed by Amy and Tony Trigwell-Jones, the inventive choreography forms the props and scenes for the different storylines. The ensemble move as one with rhythm and physical theatrics to create scenes such as a tiring rush hour journey, carnival rides, a computer game screen, and many other stunning visual actions.

The various narratives are brought to life with careful pacing and authentic performances by the cast. Instruments are even used by the talented performers to emphasise the spellbinding storyline. Each actor performs with passion and skill, and at every point the characters create an engaging and thought-provoking dialogue between audience and performer. The ebb and flow of the ensemble, tossing performers to centre stage and then pulling them back into the background, maintains the plays captivating and constant movement.

As one of the performers says, this is a “place between places”. In just one hour the performance sways into mature themes with originality and honesty. The production explores stories of abrupt human truth, executed with finesse and artistry by the young performers to make for a truly beautiful performance.