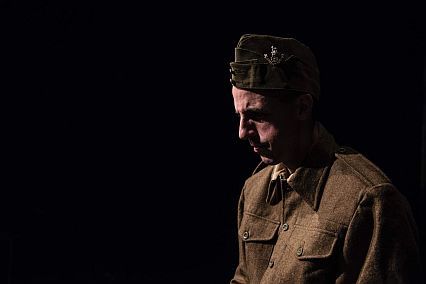 “If there’s one thing I am good at its running away”, pants young Arthur Robinson as he sprints off with a stolen loaf of bread.

There are some things he just can’t run from however. While “We’re going to Hang out the Washing on the Siegfried Line” has played in the background, his part the Second World War is going to take him down a very different line.

The war initially seems far away from his Birkenhead home, “cosy” with seven of a family, in the shadow of the Cammell Laird Shipyard. The cobbled street is grimy with horse muck but the doorsteps gleam.

Known as “Joe” to all (it’s easier in a large family), he is “doing his bit” in a new job as a packer of aircraft parts and in the evening trying to pick up the courage to speak to the object of his affections, Mary at the dancing.

When Luftwaffe bombs land close to home Joe is driven to enlist in the Reconnaissance Corps of the Loyal Regiment and soon finds himself shipped overseas with new colleagues. The loss of their ship and its supplies leaves a poorly equipped force to defend Singapore from the advancing Imperial Japanese Army.

Taken prisoner he disappears into the jungle to toil on the infamous Burma “Death” Railway in a struggle with abuse, brutal conditions and disease.

The play is a lovingly crafted personal account of the experiences of the author / performer’s Great Uncle. With just a trunk containing a few costumes he transforms Joe from a wide-eyed innocent to a disease ravaged husk. The story is told very much from Joe’s point of view, we see through his widening horizons the landscapes and his group of colleagues.

The story telling is strong and traditional, wearing its heart on its sleeve and in some ways its craft (such as the repeated body language of his mother’s too-tight hugs). The audience is drawn to invest, relate and empathise with Joe and in return the horrors of the railway are not employed gratuitously.

Bryan’s strength is knowing that you need to put everything into a one-man show and then being brave and skilled enough not to run from it. The play is a different approach from last year’s Trashed but it’s difficult to fault.