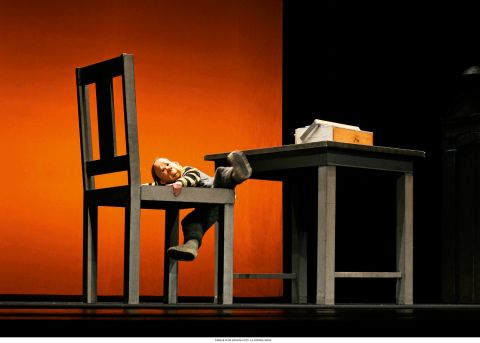 Internationally renowned Berlin based physical theatre company Familie Flöz is back, not in full voice, (they’re wordless!) but in full vigour at the Fringe. In a co-production with Admiralspalast and Theaterhaus Stuttgart, the theme for their latest show, Infinita, is the cycle of life.

Familie Flöz’s trademark style of mask theatre holds universal understanding that transcends language barriers. From the brilliantly captured actions of the jelly legged baby in a playpen trying to find his feet to the hesitant steps of the faltering old man whose lost his footing and back again, the incredible 4 strong cast perform a masterclass of mimicry, capturing the ages and stages, and their passing in a blink of eye, magnificently. Like real life, it is at once tender, moving and utterly anarchic. It even handedly deals with childhood sexual curiosity through to the indignity of incontinence with a kindly humour.

In a miracle of inventiveness that’s full of playfulness, but not so much as to mask the show’s deeper message, they deal with the dynamics that are ever present on life’s journey through slapstick, clowning and acrobatics, all performed with immaculate timing.

This time, video artwork and animation from Silke Meyer and Andrea Dihm, add the dimension of quite remarkable silhouette work as a backdrop and as a prequel to the show. As the large Pleasance auditorium slowly fills, a crowd of silhouetted figures massing to a funeral manage to mirror the activity of the live audience and set the show’s tone of life and death.

Giant furniture, like that of the US conceptual artist Robert Therrian, are the playground for a fabulously realised curious toddler and either a conscious or unconscious salute to Slav’s Snow Show with a giant ball game involves an eager audience. Music from cello and piano adds poignancy at suitable points but at the other end of the scale, the scene of 3 old pals on a bench conducting a radio is nothing less than comic genius.

Infinita is a sensitive, endearing but very funny evocation of interdependence - a physical symphony to life, love and memory. Familie Flöz gives bravura performances that serve as a glorious reminder of the human capacity to soar before that final bright light. Long may Familie Flöz shine!