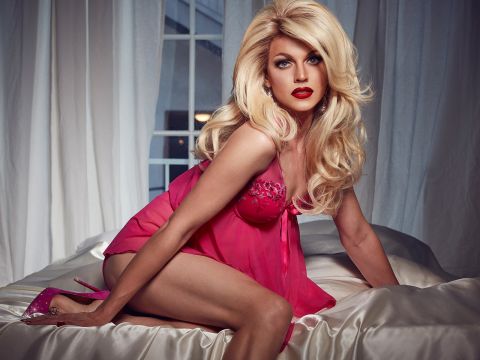 It’s time to get caught in the act with Celebrity Big Brother winner and RuPaul’s Drag Race (Season 6) runner-up Courtney Act as she tucks herself in for an evening of secret sharing and songs in her new show Courtney Act: Under The Covers. Well, what else is a fluffy double bed for?

Plucking some of the best-loved, and lesser known songs that have been covered over the decades, this blonde bombshell gives them a wake-up call with splash of Courtney. Giving Michael Jackson’s ‘Beat It’ a vegan twist, taking Madonna’s ‘Like A Virgin’ through the genre-ringer and stunning the audience with her rendition of ‘Teenage Dream, there appear to be no boundaries for her vocal range. Accompanied by an on-stage pianist, performance is as impressive as ever seeing her really come into her own during the only original song she performed, ‘Body Parts’.

Notorious for crowd interaction, this drag star is no exception. In the intimate setting of Underbelly’s Spiegeltent, there is a sense that you are really in her bedroom. She banters with the crowd and relaxes into the performance almost immediately, despite a minor wardrobe malfunction - we’ve seen it all before after all!

Packed with a lot more chatter than her previous production, Under The Covers is more than a cabaret performance but a platform for the Australian drag star to expand on the LGBT+ discussions she filled her time in the Big Brother house with. Those who didn’t catch her in the house may feel at a slight disadvantage to begin with, but it will become abundantly clear by the end of the show of the impact this artist has had for her community.

Grab your teddies, loose the slippers and slip under this drag star’s duvet. Prepare for some snap and tickle as Courtney Act rocks your socks off with some outstanding covers!