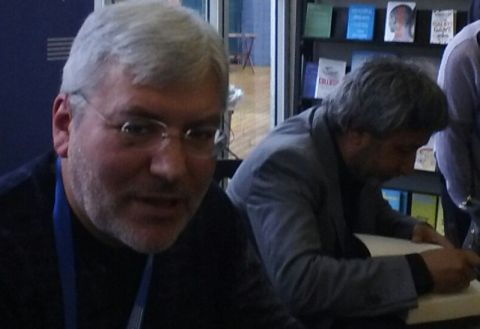 These two talks by European writers at the Edinburgh Book Festival had themes of storytelling in common, with an emphasis on loss – of country, language, memory and the kind of losses and suffering incurred in war and displacement.

But there was also, of course, the gains through the very fact of these stories being written down. Most interesting I felt was the idea of the storyteller, how this voice was either ‘given’ or had to be found and how much or how little, it differed from the author’s own voice.

Daniel Hahn chaired both talks. In the first, he spoke to Jacek Dehnel and Andrei Ivanov, about their novels Lala (translated by Antonia Lloyd-Jones) and Hanuman’s Travels (translated by Matthew Hyde). Daniel says that both books though very much factually based, are written in a fictional style read like novels and are classed as such. They are also both about survival, through suffering and war.

The title Lala is the affectionate name of Jacek’s grandmother and Jacek says he was ‘given the language of the storyteller’ from his grandmother who told him to ‘write it all!’

When Daniel asks them to describe the impulse that moved them to write, Jacek says, ‘It’s about pillaging and looting, which is not really enjoyable, but there is a certain pleasure in it. Young writers often use what you get from your family and childhood. You loot it as you don’t have any other sources at age twenty’.

He later claims to ‘hate’ writing. He has to fill up the ‘unstable places’ and they get ‘sticky and disgusting’. And the final result – well it is never as good as the Platonic conception! But his neat and unusual sartorial style (check jacket and trousers, black bow tie) and his twinkling eyes belie this disdain.

Lala is the stories of his grandmother who fears that she is losing her memory, and wants to tell these stories before they disappear.

Jatek tells us she had an interesting life, between divorcing her first husband and marrying her second. She lived with them both in a ménage à trois.

Hanuman’s Travels is also about stories, this time of two men in a refugee camp in Denmark.

Andrei says that the reader is supposed to meet characters without knowing their backgrounds. During his own time in a refugee camp the people he met there half hid their identity.

Andrei says he needed a storyteller. He and the storyteller ‘are not the same person’ so he had to find one, he had to create a voice.

At first he thought he might use ‘Camp’ as the storytelling voice then on the way to Prague with his wife-to-be (a romantic period in his life, he says) he started telling her the stories and he realised that he had found his storyteller voice.

Both writers are superb storytellers and very funny, though in quite different ways. Jacek is flamboyant, with his unusual but stylish clothes, his gestures, and his ironic take on writing (pillaging and looting), his language seemingly designed to downplay the very real work and skill of the writer, and also to leave an impression.

Andrei’s humour is much more dry and deadpan. He relates the story of one of his plays, about marginalized people, being performed on the stage in Hamburg (in a very third rate theatre!). A man with a bicycle went past, who looked like a vagabond. It turned out this man was going to play the part of him, the author!

‘It really hurt!’ he said, as he assured the audience ‘I am not a funny man’.

Eugene Vodolazkin's The Aviator (translated by Lisa Hayden) is about a man who wakes up in hospital, and who tries to retrieve and reconstruct his memories, his life. When Daniel talks of the fragmentary structure of The Aviator Eugene says all his texts are fragmentary and it is a convenient structure, for it opens up the possibility of changes of focus; for we don’t describe our lives in detail day by day, we select. There are always empty places.

The germ of the idea for the novel came from the time when he walked every day through the streets of Paris on the way to work at the Bibliothèque Nationale. He passed the building where Stendhal lived and wrote Le Rouge et le Noir. Eugene imagined Stendhal coming back in the present day and finding no friends left, nothing, no black, no red, and he tried to imagine the melancholy he would feel. This was the beginning of his novel The Aviator.

Eugene says there are two types of history – the ‘big history’ of countries and nations, and personal history. ‘Big history’ is only a small part of the personal history of a man or woman. What a person remembers is individual to him or her – they might remember the sound of rain – as now, falling on the marquee roof – the little events which are written only in people’s hearts. It is our happy – or unhappy – days which make up our consciousness. And he says, ‘to use Lermontov’s expression – I have no great interest in history, my interest lies in the history of the soul’ that is, personal history.

Continuing with the theme of the personal in literature rather than the epics of great world events he gives an example from Nabokov, who said that if you want to understand Gogol’s writing don’t expect to learn about history, but you will learn about his personal demons. And he says it is the same for him, that in his writing, he is trying to solve his personal problems in a public way!

When someone in the audience asks how reliable are the memories of Platonov (the protagonist in The Aviator) Eugene replies that memories are not always 100% reliable, whether of characters or living people. ‘As a historian I would say we have to deal mostly with our notion of real events’. In other words ‘actual real events’ are slippery and subject to human interpretation, colouring, angle, geography, climate, source of information. ‘Sadly’ he says ‘Newspapers try to change our ideas about nations and events.’ And while he has ‘no political views’ what is happening in the world right now could be described as ‘the war of the words’. There is so much propaganda and millions believe in this propaganda which makes things very difficult. At no other time he says, has the world been ‘so deformed by words’.

An expert in medieval Russian literature and folklore, Eugene is well versed in the positive power of language and stories. The main theme of The Aviator he says is loss, but it is also about the retrieval of stories, of bringing back together the pieces of the past.